I defy anyone out there not to be totally bewitched by the cartoon feature written and directed by animator Michel Ocelt. Starring, amongst others, the voice talents of Julien Béramis as the boy and Marine Griset as the girl, Tales of the Night will quite simply take your breath away as it interprets several fairytales in a mesmerising silhouette extravaganza, shown against a constantly changing colour background of vibrant acids and muted pastels.

In a disused cinema an old man, a boy and a girl, meet to tell fairy-stories which the boy and girl then re-enact after having transformed themselves into the main characters. The Werewolf, The Tom-Tom Boy, The Boy Who Never Lied and The Girl Doe and the Architects Son amongst others, bring together an array of fantastical beasts, evil magicians and happy ever after endings in a selection of stories which, like all the best fairytales, leaven their fun with a thought provoking denouement. 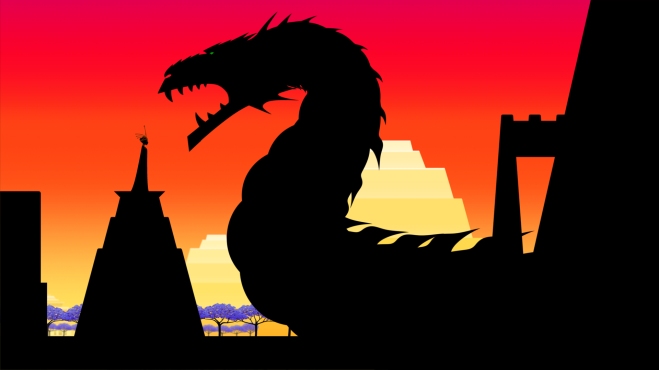 If, like me, you have to shamefully admit that you have never heard of Michel Ocelot, you are undoubtedly in for a treat. The stories which jump from the screen in a seamlessly lifelike series of animated silhouettes can be seen from two angles.

Firstly looked at on a narrative level the clever and witty tales, though likely new to most, have basic thematic threads which should be recognisable from many better known ones. The central characters, like Ti-Jean in Ti-Jean and Beauty Not Known, come alive as feisty individuals whose common-sense and goodness win out over whatever dangerous situations or scheming adversaries they come up against, such as the fearsome dragon whose death destroys the mythical metropolis at the centre of ‘The Chosen One of the Golden City’.

An equally satisfying approach is simply to sit back and let the intoxicating images which fill the screen wash over you. Being in French with English subtitles, younger viewers may find it hard to keep abreast of the proceeding’s finer nuances. However it is unlikely that they will get bored during Tales of the Night‘s relatively brief eighty four minute duration, as Ocelt’s masterful work which is reminiscent of the drawings of Jan Pieńkowski, is a visual feast where humans and beasts materialise against a backdrop of lost cities, subterranean kingdoms and the faraway lands where the stories play out. 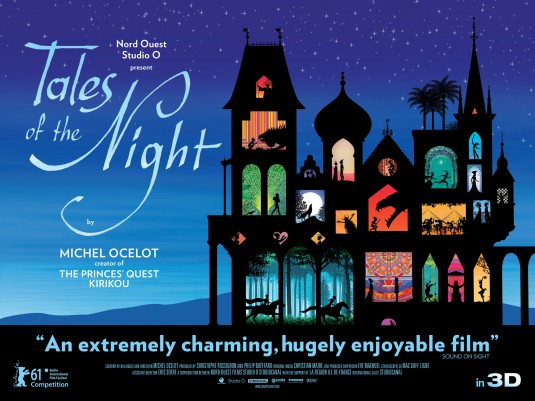 I have been glad to discover that there are many more examples of Ocelt’s fantastical flights of fancy out there and, after watching Tales of the Night, I for one can’t wait to track them down.