Chilling in every sense, The Grey, though visually stunning, is unlikely to make you want to visit Alaska anytime soon. Starring Oscar nominee Liam Neeson (Schindler’s List (1993)), Frank Grillo (Mother’s Day (2010)) and Dermot Mulroney (J. Edgar (2011)), this thriller from director Joe Carnahan (Pride and Glory (2008)) is an enthralling study of man’s breakdown when faced with nature’s raw elements and the base instinct for survival.

Flying home after a gruelling five week stint at an Alaskan refinery, a group of misfit oil workers find themselves at the mercy of the elements when their plane crashes in the frozen wastes of the Alaskan tundra. But the survivors, including sharpshooter John Ottway (Neeson), hired by the refinery to protect the workers from attacks by wild animals, soon discover that subzero blizzards are the least of their worries, as a pack of predatory wolves close in on the motley group who they feel are threatening their territory. 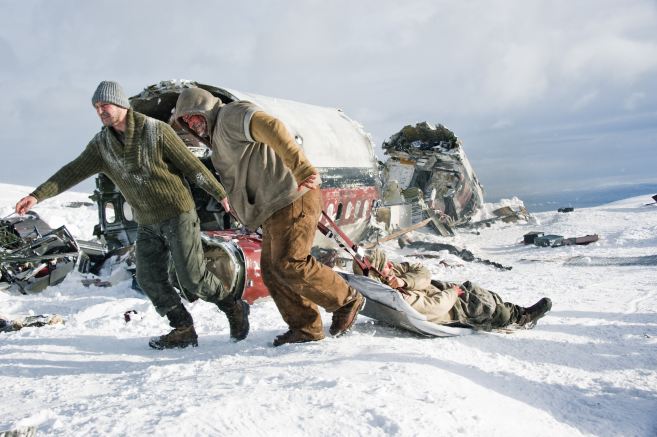 There can’t be two more frightening elements of nature gone amok than wild animals and wild weather. Combine these with a plane crash (a situation which seems to unrealistically scare people in relation to its statistical likelihood of happening), and you have the premise for a nail biting thriller.

The story of plane crash survivors battling against the odds has been done before (Alive (1993)). However, though the film’s premise may lack originality, the passion Leeson, Mulroney and the others portray as their characters are reduced from hardened loners (as the film progresses you are surprised at how little these roughnecks know of each other considering the time they’ve spent together in the confines of a remote refinery) to broken men, gives you hope that everyone still has some degree of humanity for their fellow man when the chips are down. Grillo’s meltdown in particular, as his cocky self centred character Diaz is brought to his knees by the realisation of the hopelessness of their situation, is a genuinely moving study of a man pushed to the edge of human endurance.

The starkly breathtaking backdrop against which the story unfolds was given a brutal realism by being shot in the remote British Columbian town of Smithers. Fortunately however, this and the villains of the piece, the wolves, are only catalysts to bring out The Grey‘s real star, man’s humanity which glows to the bitter end.