Oh dear me.  I had such high hopes for Bloodstorm (2012), the horror film by director Joseph J Lawrence starring Dominique Swain, Jake Busey, Josh Allen and Christopher Karl Johnson .  How could you go wrong with a heady, politically incorrect concoction of zombies and Nazis? Well, very, if this woeful outing is anything to go by.

In the wastes of Antarctica a group of scientists make an alarming discovery, deep beneath the ice and snow of this frozen landmass. Sixty seven years ago World War II did not end as the world was led to believe. Instead of the Nazi defeat, a platoon of storm troopers led by the infamous Dr Josef Mengele (Johnson) escaped with a prized cargo. In the interceding years Mengele has been abducting anyone with the misfortune to stumble across the Nazi’s underground stronghold, and use them to continue his obscene human experiments.

With the bodies of various members of the latest unfortunates Mengele hopes to complete his ultimate experiment which, along with the army of zombie soldiers, will take him one step closer to realising his lifelong dream of establishing a Fourth Reich and his ultimate goal of world domination.

Can the young scientists stop the evil doctor and find their way back to civilisation? Will Mengele and his rotting troops be able to succeed where so many zombie Nazis have failed before? Does anyone really care? 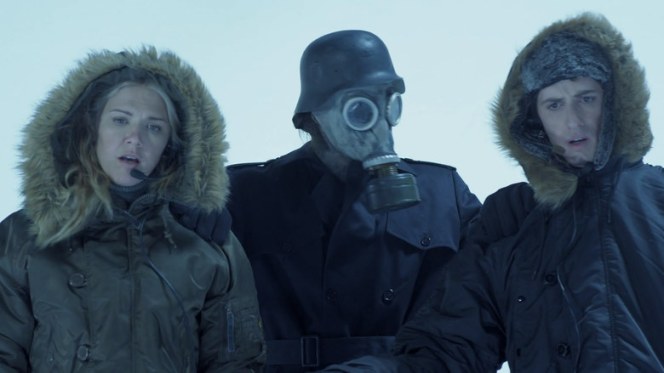 Zombies and Nazis go together like Dr Frankenstein and his monster. Over the years in horror cinema the two have been brought together in unholy union on countless occasions – from the Peter Cushing chiller Shockwaves (1977) to the recent Norwegian comedy / horror Dead Snow (2009) – with varying degrees of success.

However Bloodstorm really does plumb new depths of tastelessness, both in subject matter and in your face gore. There is still something offensive when Nazis are used as a subject of entertainment like they are here – whether they should be seen in this context is still a contentious issue for many. However here it’s even worse as one of the subjects used in the storyline are the infamous experiments carried out by Mengele. You then have the no holds barred gore which includes an abrupt take on a face lift where a man’s old skin is literally peeled away, whilst one of the female scientists is subjected to a toe-curling abortion which makes the viewer wince for all the wrong reasons. 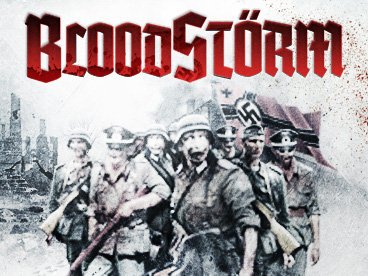 On the plus side the young cast enter into the proceedings with gusto, and their enthusiasm helps go some way to dispelling the utter preposterousness of the film as a whole. The production values, from a snow bound Antarctica and the shadowy Nazi lair beneath to the sinister gas-masked zombies and Mengele’s gory amateur experiments, are all surprisingly well done, though they do little to soften the film’s underlying air of grubbiness.

Alarm bells should have sounded when I discovered that the film had previously been marketed under the much catchier (ok, I’m kidding here) title of Nazis at the Centre of the Earth. There’s always something suspect when a distributor suddenly changes a film’s title at the last moment – what are they trying to hide? Well watch this and you’ll soon see – I guess I really have no-one to blame but myself for watching it in the first place.