Not all fans of Dwayne Johnson (and yes, there are some of us out there) do not necessarily appreciate him for his acting skills, which is just as well as there are few of those on display from him, or any of the other cast members, in Journey 2: The Mysterious Island. Though New Line Cinema’s live action / cgi family extravaganza from director Brad Peyton and starring Johnson, Josh Hutcherson, Kristen Davis and Michael Caine, is fun, it hardly sets the world alight.

Sean Anderson (Hutcherson) lives with his mother Liz (Davis) and stepfather Hank (Johnson), who he tolerates – just! An amateur scientist, Sean receives a coded message from a mysterious island which, according to every map, doesn’t exist. Determined to find the island, believing that the message is from his explorer grandfather Alexander (Caine) who went missing several years before, Sean reluctantly agrees to let Hank tag along in order to keep an eye on him. Hitching up with dubious helicopter pilot Gabato (Luis Guzmán) and his feisty daughter Kailani (Vanessa Hudgens) who agree to fly them on their expedition for a hefty sum of money, Sean and Hank find the mythical island and Alexander. However those aren’t the only things they discover, as the island is inhabited with an amazing array of monstrous beasts – as well as a whole hoard of gold ……..

It’s been said if you wish to communicate with children, either through books or, let’s face it, films, you should never talk down to them. This is sage-like advice which studio bigwigs would be wise to take on board, for even the younger audiences to whom Journey 2: The Mysterious Island is clearly aimed, will see this inflated production for what it really is – a lot of overblown foolery with little substance beneath the glossy surface. 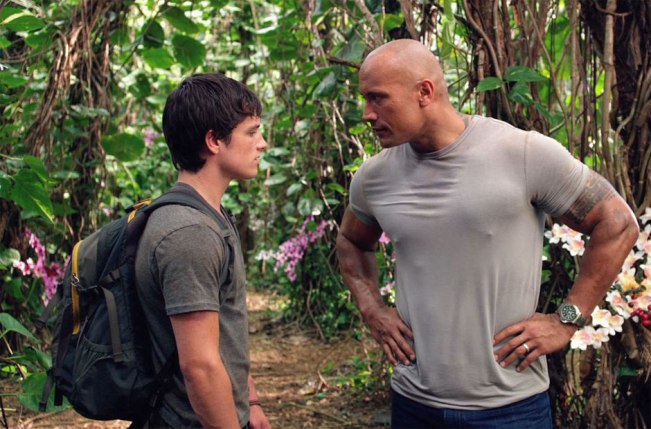 The film, like Johnson, has (some) good points. The way the storyline blends various classic adventure tales including those by Jules Verne, the king of Victorian fantastical fiction, is clever and imaginative. Also, as already pointed out, the whole production has a glossy look with the climatic escape from the island aboard Verne’s wonderfully over-the-top Nautilus submarine undeniably gripping in a boys-own fashion.

Unfortunately even this isn’t enough to save a film which ultimately lacks the oomph behind the visual pizazz, and will likely leave the most discerning and demanding audience of all, children, feeling decidedly shortchanged.