On the face of it Attack of the Werewolves (also known as Game of Werewolves or by its original name, Lobos de Arga), the Spanish frightener which impressed audiences and critics alike on its theatrical release, has much promise. Edgy humour, hairy horrors and a beautiful european setting – what more could you want? Unfortunately however, as most of this film by director Juan Martínez Moreno, and starring Gorka Otxoa, Carlos Areces, Luis Zahera and Secun de la Rosa, takes place in the dark it’s hard to tell what is going on for a lot of the time and whether, as a result, it lives up to initial expectations.

1910 and in a remote Spanish village the evil Marchioness of Marino captures a travelling gypsy and manages to get herself pregnant by him. In revenge the gypsies wife curses the marchioness and her newborn child, transforming the baby boy into a werewolf and placing the village under a constant threat of terror from the beast. In order for the village and the boy to break free from the curse, one of the marchioness’s descendants must be sacrificed to the werewolf on the one hundredth anniversary of the original atrocity.

Jump to today. Author Tomás Mariño (Otxoa) has returned to his home town, invited by the locals to receive an award – or at least this is what they have told him. Unfortunately their real intentions are much more sinister, if only they can get Tomás to play along. 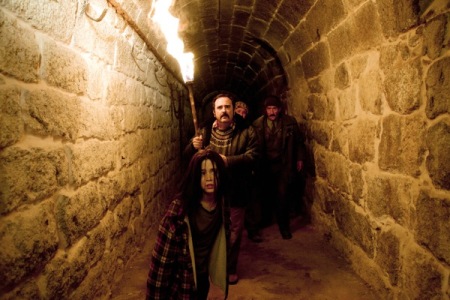 Looking forward to Attack of the Werewolves I was reasonably impressed with what I saw, up to a point. The wolves when they appear (you could be forgiven for wondering whether you will ever see any as it’s almost a third of the way into the film before they put in an appearance) are effective in an American Werewolf in London (1981) way. A sharp vein of black humour runs through the proceedings as a whole – one scene in particular with the cutting off and cooking of certain parts of the human body in order to feed a suspected werewolf is particularly effective. The relationship between Tomás and his hapless friends and relations as they join forces in a fight for their lives, also adds an extra dimension leaving the viewer actually interested in what happens to the characters – a novelty in many modern horror films.

Another aspect in the film’s favour is its setting – at least you imagine it would be if you could see it. Filmed in Galicia, Spain, the sun-bleached streets of the village and exterior of Tomás’ family manor house are stunning during daylight hours. However, come sundown, it’s nigh-on impossible to make out anything other than a lot of fur and teeth and the odd close up of a severed limb.

Hammer, the studio which put horror on the map, made a trademark of its day for night shots, which must have worked as the scenes they shot like this appeared to occur after lights out, yet you still saw everything that was going on. Modern fright films should be provided night vision goggles so you can make out what is happening in the wee small hours instead of leaving the viewer to second-guess much of the proceedings.

Attack of the Werewolves, though not bad, could have been better if you’d been able to see it all.