Made in 2007, Brave, the martial arts action adventure from directors Thanapon Maliwan and Afdlin Shauki, and staring stuntman Michael B. took several years to get a UK release, even to DVD? Watching it I think you’ll understand why.

Pairote (Michael B.), has been blackmailed by a Thai mafia gang to steal confidential customer bank details, in exchange for the life of his brother whom they are holding hostage. After successfully completing his mission, Pairote discovers that there is more to the heist than meets the eye, and that saving is brother’s life might have been more trouble than it was worth.

Sometimes it’s difficult to be a constructive critic. It’s easy (relatively) to find something to say if a film is good, or equally if it’s dire. But what if it’s neither one nor the other, if it really is just nondescript? 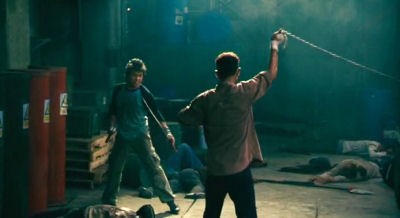 There are promising aspects to Brave, at least I thought they were, though not being an aficionado of this type of ‘adventure’ I could be wrong. The belief in ‘honour’, and the shame if this is not upheld, which eastern cultures feel so strongly, plays a pivotal role both with the hero and his adversaries, and makes for one of the more interesting narrative threads. The settings, from the high tech bank which Pairote cons his way into at the opening of the film, to the luxurious waterfront house of the said establishment’s shamed manager, are also impressive in an austere, futuristic fashion, whilst the numerous fight scenes are reasonably snappy in that staccato fashion so beloved of martial arts films, all high kicks interlaced with plenty of flying fists.

However much of the rest of the film is pretty substandard. The acting is almost as choppy as the back hands which Pairote uses to lay out his adversaries, whilst the dialogue consists mainly of his brother and him shouting “Don’t just stand there, run!” at each other as they find themselves in yet another tight spot. Apparently Michael B. has been involved with the stunts in amongst others the highly regarded martial arts thriller Ong-bak (2003), and Tim Burton’s Batman Returns (1992), so perhaps that is where he should concentrate his future energies.

I was prepared to be open minded where Brave was concerned but, despite a nice little double twist at the end, this lacklustre romp simply lacks enough punch to avoid a dishonourable demise.