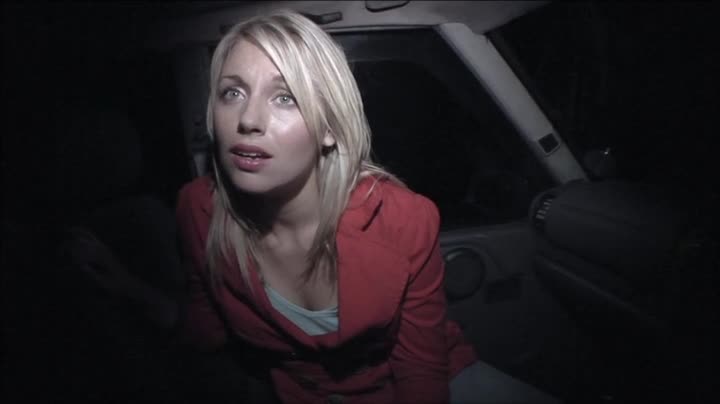 Was ever a film more aptly named than Hollow, the indie Brit horror from director Michael Axelgaard and writer Matthew Holt? Like the tree at the centre of the story its suitably gnarled exterior hides little real substance, and the sinister tale of four twenty somethings (Emily Plumtree, Matt Stokoe, Jessica Ellerby and Sam Stockman) whose lives are irrevocably effected by its malignant influence, is high on old school shocks but little else.

Two young couples, Emma and Scott (Plumtree and Stokoe) and Lynn and James (Ellerby and Stockman) escape the city for a weekend in rural Suffolk. Whilst clearing the cottage of Emma’s late grandfather, their strained relationships deteriorate further as the friends dig deeper into the legends of the surrounding area, particularly those concerning an ancient tree the influence of which is blamed for a spate of local suicides. As the couples soon discover there may be more truth to the legends than they first thought.

The underlying problem with Hollow is the format Axelgaard uses to tell the story, namely that of the handheld camera pseudo documentary. What was effective in the cult shocker The Blair Witch Project (1999), has become such a staple for film makers (particularly with the subject of horror) who want to appear edgy – as with the likes of Paranormal Activity (2007) – that it’s beginning to appear as crackly as the mock footage.

Neither is basing your story around a cursed tree anything new. Tales That Witness Madness (1973), Poltergeist (1982) and Sleepy Hollow (1999) all did it more effectively, mainly because the vegetation in those films was secondary to the main plot. A story where the tree is the central theme from which the proceedings branch is fine for a half hour television play or student film, but hardly enough to hold an eighty minute feature together. The other major disappointment is the Holt’s script. What starts promisingly by introducing the characters as they make their way to Suffolk, and when their complicated relationships are laid bare, begins to degenerate as they are increasingly effected by their surroundings, its folklore and some white powder which Scott has brought along to add buzz to the party. The constant repetition of expletives, particularly the ‘F’ word when the characters are under pressure at the climax, soon looses impact, showing a lack of imagination even if you are off your head on cocaine.

Despite a clever homage to the king of horror H P Lovecraft by setting the whole nasty business in Dunwich on the Suffolk coast, and a hauntingly weird camera angle used in one scene towards the end (you’ll know what I mean if you see it), what started with promise finishes as lifelessly as the ancient tree at the centre of the story. One only hopes that the cast and film makers behind Hollow graduate to something more imaginative in the future.