Why do we still go to the cinema. In an era when we are increasingly bombarded with more of the ‘same old thing’, it is easy to groan in despair at the lack of imagination and originality in the films rolled out week after week at our local independents and multiplexes. But still we go in the hope of seeing something fresh and new which will make the experience worthwhile. And occasionally a film still appears from amidst the dross which does just that – a film like What We Do in the Shadows. Directed, produced by and starring Taika Waititi and Jemaine Clement, this film – ‘created’ like some mad scientist’s monster from an amalgamation of various horror threads – is so unexpected that you will walk away with renewed hope and enthusiasm for a medium and genre, which of late seem to often inspire little more than despondency and despair.

Vladislav (Clement), Viago (Waititi), Deacon (Jonathan Brugh) and Petyr (Ben Fransham) find themselves – for better or worse – in a suburban house-share in a New Zealand backwater. Trying to live a normal life and make ends meet is difficult for the boys, as they have one major problem in common – they’re vampires, and as such nothing they do can ever be considered as normal. 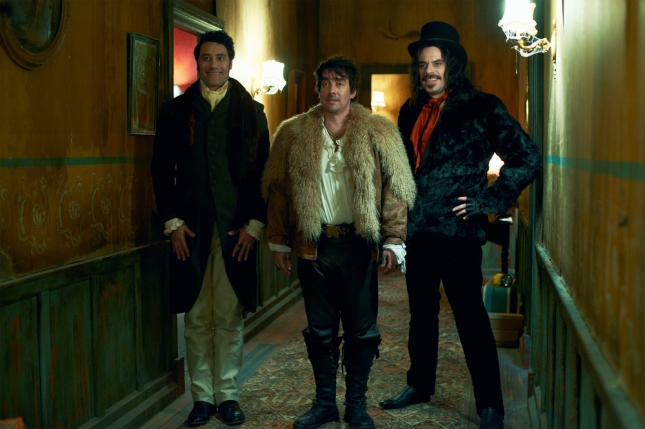 How you may ask could originality still be found in a gimmick which has, in recent years, been done-to-death by the genre which created it. After The Blair Witch Project (1999) introduced cinema goers – and in particular horror fans – to the found / reality footage medium, it seemed that every genre film used the approach to some degree. Which makes it uplifting when something like What We Do in the Shadows comes along, managing to put a new twist on the method and make it appear invigorating again. The secret of the film’s success is that, unlike most that use the approach, this one doesn’t really try to pass off its characters as ‘real’. When it boils down to it film is for escapism and viewers don’t (despite what they may say to the contrary) want to see people living lives which are often more mundane and boring than their own. But here we have characters who – despite their best efforts at trying to blend in with the ‘humans’ amongst whom they live – are always going to stand out from the crowd. There’s medieval aristocrat Vladislav who has more than a hint of ‘Vlad the Impaler’ about him, nineteenth century dandy Viago who is too cool for his own good, bohemian layabout Deacon (Jonathan Brugh) and Petyr (Ben afar sham) who looks like he has walked straight out of a famous Stephen King novel. The actors exude an air of disheveled anarchy which will make their characters recognisable to anyone who has ever found themselves having to live in shared accommodation.

It’s from their attempts to be normal that most of the humour of this witty pastiche of vampire lore arises. The idea and screenplay by Waititi and Clement cleverly blends common blood sucker traits, like sleeping in coffins during the day, a mortal fear of daylight and only being allowed into a house or nightclub – which the boys spend most of their waking hours trying to do in the belief that it’s where ‘cool’ humans hide out – when they are invited, with an acid sharp wit which will have even the most jaded horror buff howling for more.

In this house of misfits it is the level headed Viago who keeps the group together and whose personal predicaments – such as his fastidious attempts to keep his room clean during the disastrous seduction of an unfortunate victim – best exemplify all that is good with the film. In a world where we are increasingly bored by the prosaic here is something which, like its characters, is refreshing and fun because it embraces the fact that it’s different. What We Do in the Shadows should be made compulsory viewing – both for filmmakers as well as jaded audiences – as it gives fresh hope that there is still new life to be found in cinema if we care to look beyond the normal.