Writer and critic David McGillivray has never been one to shy from controversy. So it should hardly have come as a surprise when, at a screening of director / producer Pete Walker’s sleazy horror House of Mortal Sin at London’s Barbican Centre, McGillivray – who penned the screenplay – revealed that he hated the film and had only seen it once at its première. He explained – during a question and answer session before the screening – that he is still embarrassed at what he believes is a cringe inducing script, for which he readily accepts responsibility.

Jenny (Susan Penhaligon) and her sister Vanessa (Stephanie Beacham) live in the flat above the gift shop which they run in Richmond, West London. Generally carefree, Jenny is nonetheless troubled by the attentions of her on/off boyfriend Terry (Stewart Bevan). On a whim one day, whilst passing a local church, Jenny goes to confessional, unloading her worries upon the residing priest, Father Xavier Meldrum (Anthony Sharp). Leaving the church Jenny returns home and tries to forget having been to the church, simply putting it down to something she did on the spur-of-the-moment. Father Xavier however has other ideas. Sexually repressed he has taken a likening to Jenny, resulting in an unnatural and deadly infatuation with the vulnerable young woman. 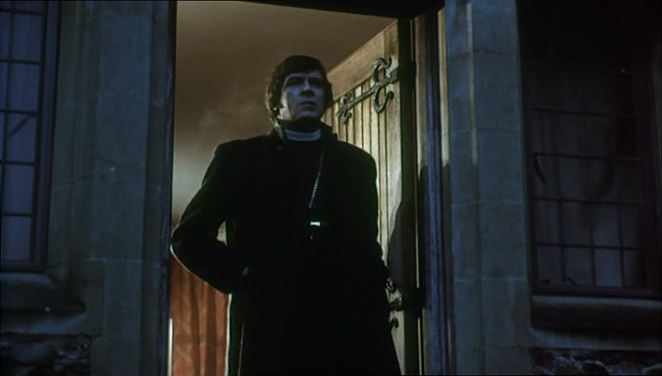 Watching House of Mortal Sin – for which he suggested the catchier moniker ‘Mass Murder’ – one can’t help but feel McGillivray is being unduly harsh with his pronouncement on the film. Made on the back of Walker’s previous successes in 1974 with Frightmare and House of Whipcord – also penned by McGillivray – the film is in no way an erudite piece of filmmaking, combining as it does the subjects of horror, sex and the Catholic church in a mix which pushes blasphemy as near to the edge as was publicly acceptable. However making scholarly and award worthy films was never Walker’s aim. He and a group of regular collaborators including McGillivray and actress Sheila Keith – who gives a brilliantly chilling turn as House of Mortal Sin’s sadistic housekeeper – were in it to make money and have fun in the process, both aims which they regularly achieved.

Walker and McGillivray thrived on controversy. It seemed, with each successive film on which they worked, that they saw it as a challenge to cast their gaze upon increasingly offensive and disturbing subject matters. Having looked at cannibalism (Frightmare) and sadism (House of Whipcord) it was probably inevitable that the Catholic church and its often hypocritical and repressive attitudes to sexuality should fall victim to the duo’s unflinching scrutiny. McGillivray has described the fun the two had – when working on House of Mortal Sin – in deciding how to use various pieces of Roman Catholic paraphernalia as tools to mete out punishment through ever more bizarre and horrific methods. No object was sacred as rosary beads, incense burners and communion wafers, along with a pot of boiling coffee and a good old knife to the throat, helped increase the body count to seven, an impressive total for a Walker film.

It always amazes how the trendy settings of 1970s London and it’s outlying regions, manage to disguise a multitude of sins. The area in and around Richmond Green to the west of the capital had – and still does – an artistic / bohemian edge, making it the perfect location for the bric-a-brac shop that Jenny and Vanessa run and in which one of the story’s most grisly murders takes place. It is however Father Meldrum’s church and its adjoining rectory, which are the focus of most of the film’s shocks and unpleasantness. The gothic’esque architecture, dark corners and twisting staircases of the buildings make ideal settings against which Meldrum slowly sinks deeper into delirium, as his obsession with Jenny works towards it’s carnage ridden climax. In the years since the film’s release much criticism has been aimed its ‘cliché’ ridden finale which occurs during a thunder storm of biblical proportions. Considering however the overall tone of the film, the said tempest seems almost obligatory, not only as a reflection of the frustrated build up of Meldrum’s guilt and degradation, but also to emphasise perfectly the ecclesiastical milieu.

As mentioned earlier Walker had a core group of associates – particularly in front of the camera – who worked with him repeatedly. Both Kim Butcher and Andrew Sachs – who are seen here briefly in fleeting parts – had appeared in Frightmare, whilst Beecham would go on to feature in the even seedier Schizo later in the year. Penhaligon – who had just starred in the controversial television drama A Bouquet of Barbed Wire, gave a satisfactory if somewhat perfunctory performance as Jenny, in a role which admittedly required her to do little more than run around looking increasingly agitated and distressed. But it’s the characters of Meldrum and his sidekick Brabazon who stay in the memory long after the film finishes. Peter Cushing was apparently offered the role of the demented priest, which he unfortunately couldn’t accept due to other commitments. Anthony Sharp however is marvellous in the part, as a man struggling with personal demons whilst endeavouring to guide what he sees as his wayward flock: his air of haughty piety leavened with an underlying vein of sexual frustration elicits just the right mix of disgust and sympathy from the viewer. It’s Keith though – even with a relatively brief screen-time – who steals the show as the callous Brabazon, proving how silence often says more than words. In the few scenes in which she appears – frequently ‘speaking’ with only a curl of her lip or sideways glance – she displays a broader emotional range than many actors can through a page of dialogue, proving why she became Walker’s go-to actress if he required someone who could reliably create a disquieting feel of demented detachment.

House of Mortal Sin remains a wonderfully atmospheric snapshot of a London, and period of British horror, which have passed into the darker recesses of cinematic history, but which still remind viewers of a time when those involved in the process of making these films actually seemed to enjoy what they were doing.