If you’re not a fan of Alfred Hitchcock then it might be best to shut off now. Responsible for some of the 20th century’s most iconic films – Rebecca (1940), Notorious (1946) and North by Northwest (1959) to name a few – Hitchcock is one of the most influential filmmakers in cinema history. The legendary director who had a ‘thing’ for Grace Kelly – they made three films together, Dial M for Murder (1954), Rear Window (1954) and To Catch a Thief (1955), and would probably have done more had she not left the gilded cage of Hollywood for the equally cosseted world of Monaco – and a penchant for the books of Daphne Du Maurier, also had a love for the macabre. Many of his films had markedly sinister overtones, and in particular the ones which are celebrated in two new films which deal closely with his approach to his work and relationships with several of the women in his life. More recently saw the release of Hitchcock (2012) starring Anthony Hopkins and Helen Mirren in a film dealing with the behind-the-scenes dramas during the making of perhaps his most infamous film, Psycho (1960). 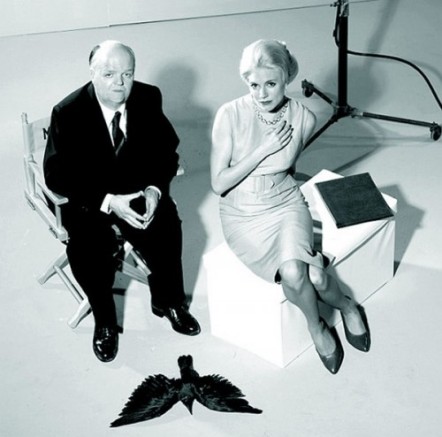 2012 also marked the debut of a film which garnered rave reviews when it was first seen on UK television, before its DVD release. Directed by Julian Jarrold and written by Gwyneth Hughes based on American author Donald Spoto’s book Spellbound by Beauty: Alfred Hitchcock and his Leading Ladies, The Girl looks at the director’s obsessive relationship with the actress Tippi Hedren during the making of the avian chiller The Birds (1963) and later the psychological thriller Marnie (1964).

Though by dint of the subject it clearly has to cover the making of the films and the lengths Hitchcock went to in order to achieve realistic perfection, this is in fact more of a human drama than mere diary reconstruction of the production of those films. The Girl charts how Hitchcock discovered Hedren, who at the time was eking out a living as a model and bit part actress, and made her a star only to effectively stymie her career after she spurned his sexual advances. It is also a fascinating study not only of one of Hollywood’s most successful filmmakers, but also a man with a dark side who was almost as twisted as some of the characters from his films. 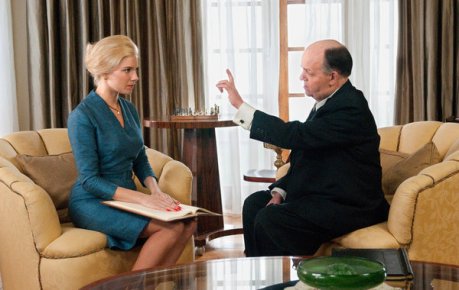 The central cast is what makes The Girl more than a simple made for television movie. British character stalwart Imelda Staunton is marvellous as Hitchcock’s wife Alma, for whom your sympathies are divided as it is clear that she is aware of her husband’s extramarital impulses, preferring to turn a blind eye rather than confront him. Just as sharp though is Penelope Wilton who gives a moving performance as the director’s long-suffering PA, who takes endless verbal abuse and castigation at the hands of her insensitive boss, yet stays with him clearly out of a deep seated affection and admiration.

However it is Toby Jones’ creepily realistic portrayal of Hitchcock (close your eyes and you’d think the director was alive and well) and Sienna Miller’s outstanding turn as Hedren, that make the film so memorable. Miller – who one feels has never really reached her full potential as an actress – turns any preconceptions you may harbour about her on their head. Running the full gamut of emotions from elation and euphoria when Hedren originally gets the role of Melanie Daniels in The Birds to fear and loathing when she quickly realises Hitchcock’s interest in her career is not purely altruistic, Miller proves that she would have been more than worthy of a leading role with the director had he still been alive.

In fact taken as a whole, The Girl is a film of which Hitchcock himself would most likely have been proud.