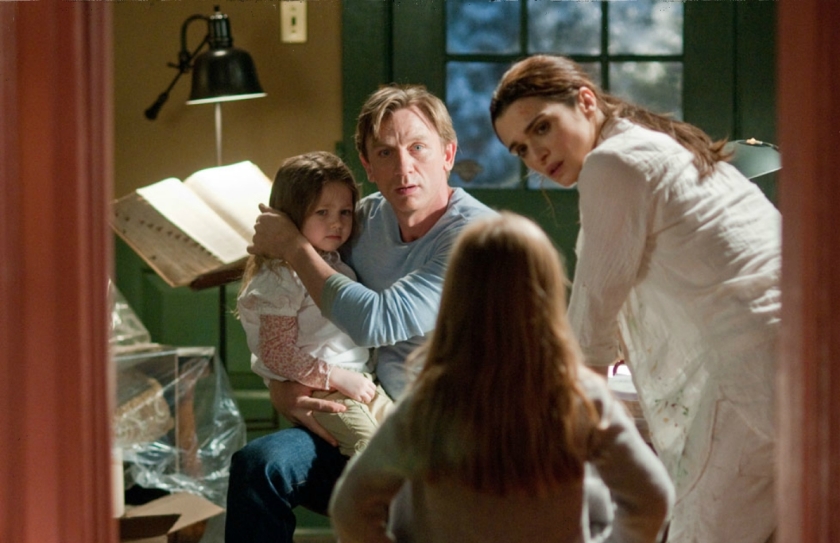 I’ve never been a advocate of the ‘moody’ school of acting, an approach taken to new heights by Daniel Craig in the lukewarm chiller Dream House (2011).  Starring the emotionless Mr Craig and an insipid Rachel Weisz, director Jim Sheridan’s supposed edge-of-your-seat mystery is more likely to have you dying of boredom than of fright.

Will Atenton (Craig) and his wife Libby (Weisz) leave the scrum of New York city and relocate to the suburbs, so he can devote his time to the bestselling novel he has always been itching to write.  With their daughters Trish and Dee Dee (played by real-life sisters Taylor and Claire Geare), the couple move into a beautiful, if slightly dilapidated, house which has sat empty for five years and that they set about renovating with rigorous enthusiasm.  However it’s not long before they discover why their new home has remained vacant for so long, and that what they believed to be their ‘dream house’ is more of a nightmare due to its violent and grisly past.

I’m not quite sure what I expected from Dream House, but it was certainly something more inspiring than this lifeless haunted house / demented killer / madman hotchpotch, which is so unsure as to what it’s trying to be that it results in being very little of anything.  Everything is confused, particularly towards the climax where the action jumps sporadically back and forth so much between reality and fantasy that you no longer know what’s real and what isn’t.  The neighbours reactions to Will and Libby’s efforts to get to the bottom of the mysterious incidents surrounding their new home, and the local police and officials dismissal and uncooperativeness at helping them, is clearly meant to heighten tension but instead becomes just as irritating and frustrating for the viewer as for the bewildered couple.  Unfortunately David Loucka’s screenplay gives Craig little more to do in moments of supposed horror, than to shout at Weisz to “get back in the house”‘, which one imagines she is happy to do to get away from her husband as much as from any encroaching evil.

Apparently after disagreements between Sheridan and the film’s studio Morgan Creek, he, along with Craig and Weisz, refused to have anything to do with promoting the film to the press.  After watching it one can hardly blame them.