Vincent Price could well go down in the annals of film history as one of the industries most misunderstood actors. Though primarily remembered for his contributions to horror, such films were responsible for less than a third of a prodigious output spanning almost sixty years.

It was the said horror roles however, which only started for earnest in the latter part of his career, that often gave Price the best opportunity to display the facets of his personality which, had his career taken a different path, would have suited him perfectly for classical roles, rather than what he would probably have been the first to admit was much of the time schlock, but for which he is so affectionately remembered. These often overlooked skills came to the fore in a quartet of films the actor made during the early 1970’s, all of which, in their own way, captured perfectly the Shakespearian nuances which often bubbled just beneath the surface of many of his best remembered screen appearances.

Though it was not the first time he had worked in London, the four films Price made there in consecutive years between 1971 and 1973, stand out as milestones amongst his later work. The Abominable Dr Phibes (1971), Dr Phibes Rises Again (1972), Theatre of Blood (1973) and Madhouse (released in 1974, though actually filmed the previous year) captured the wonderful sense of anarchistic fun and obvious relish he took in his chosen art form. 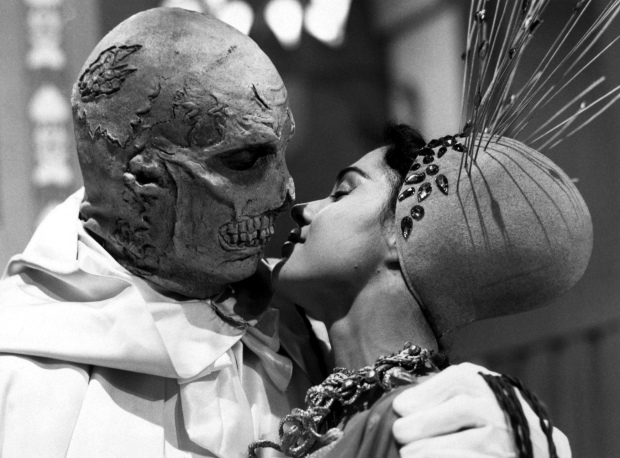 The ‘Phibes’ films were produced by the international arm of AIP (American International Pictures), who had been responsible for a rash of psychedelic movies during the late 1950’s and 1960’s aimed primarily at teenagers, including films such as Dr Goldfoot and the Bikini Machine (1965), and the famous series based on the stories of Edgar Allan Poe and directed by Roger Corman. When compared, these earlier AIP films have many similarities with the ‘Phibes’ titles and later Madhouse – small budgets, stark colours and of course the presence of Price himself.

The films (at least five possible sequels were planned after the success of The Abominable Dr Phibes, including Dr Phibes in the Holy Land, The Brides of Phibes, Phibes Resurrects and The Seven Fates of Dr Phibes, though in the end only Dr Phibes Rises Again ever made it past the idea stage), worked for several reasons. Set in the 1920’s, they capture perfectly the decadent and frivolous nature of the decade, whilst the often garish and bizarre qualities of Art Deco, perfectly reflect the traumatised and misunderstood man beneath the artificial facade. The role of Phibes allowed Price’s own personality free range – from deep introspection as he mourns his beloved wife Victoria Regina Phibes (played by Caroline Munro, though she was uncredited in the finished productions), to the extravert outward flourishes with which he despatches each of the poor unfortunates he blames for his said wife’s death.

As mentioned, a number of sequels were rumoured after the success of The Abominable Dr Phibes. However for various reasons they never got made, and that which did, Dr Phibes Rises Again, though as inventive and fun in many places as the first was not as resounding a success. As so often the case the sequel was rushed into production on the back of the success of the first and unfortunately it showed. 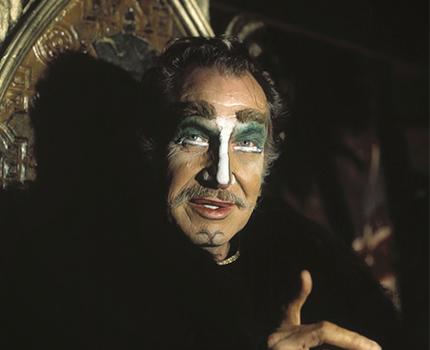 Though produced by a different company, in this case MGM, when viewed together his next film, Theatre of Blood, and the ‘Phibes’ films are similar in a number of ways. All area set in a Britain which either either no longer existed (as with ‘Phibes’ in the long forgotten 1920’s) or never actually existed at all, save in the sanitised world of the movies (London in reality has never looked as good as it did in Theatre of Blood, even during the hip 1970’s). However these were both worlds in which Price with his plumy tones and impeccable manners appeared perfectly at home in.

They also had casts that included a rogues gallery of British thespians which most actors would have killed to work alongside. Peter Jeffrey, Terry-Thomas, Peter Cushing and Beryl Reid were up against Phibes and his dastardly plots, whilst Theatre of Blood‘s Shakespearean anti-hero Edward Lionheart made short work of everyone from Harry Andrews and Michael Hordern to Arthur Lowe and Dennis Price, with help from the delectable Diana Rigg as his devoted daughter and partner in crime. Again Price appeared perfectly at home amongst these stalwarts of British theatre and film, so much so that in Theatre of Blood it would be hard to believe that he wasn’t an English man himself.

Then of course you have the costumes, which in all three films gave the flamboyant side of Price’s personality free reign. Many of the roles during his career had been period pieces involving his requirement to ‘dress up’, but perhaps none more so than Lionheart, which saw Price in both Shakespearian costumes and contemporary outfits, whichever befitted his next victim’s demise.

Madhouse, the final film of what could be called Price’s ‘London Quartet’, shared many similarities with the ‘Phibes‘ duo and Theatre of Blood, not least of which was their main theme – a maligned or wronged central character extracting revenge on the people he believes responsible for destroying his life, career, or both. However Madhouse had perhaps an added poignancy as it was to be the last horror film Price would make for AIP, the company with which he had been so closely linked. During the film, flashbacks are taken from many of the Poe stories he made for them during the 1960’s, as he plays an ageing actor looking back at his career, who may or may not be mad. At various stages throughout the film he also wares a fright mask, baring similarities with Phibes, whilst for his arrival home after his release from the mental institution, he dresses identically to one of his characters from Theatre of Blood complete with a trench coat offset by a jaunty derby.

One can’t help but be hit by the fact that Price’s characters in these four films (even Phibes in his own way) are all ‘serious’ actors, and that this above all else is what he was. Viewing Theatre of Blood, one can still sense Price’s sheer enjoyment of the theatrical opportunity the role gave him, which may explain why he always said that the part of the slighted classical, Shakespearean actor had been amongst his favourites. And why even forty years later, this and the other three films he made in London during the early 1970’s, show perhaps better than any, the real Vincent Price.

I'm a journalist and film critic based in London. I'm currently the News Editor of the Flickfeast film website, for which I also review new film releases. As well as this I review films, do features and interviews and cover festivals for various other magazines and on-line publications. I've created the Screen & Gone blog, so that I can share my thoughts and bring a new perspective to films, old and new, which may have passed you by.