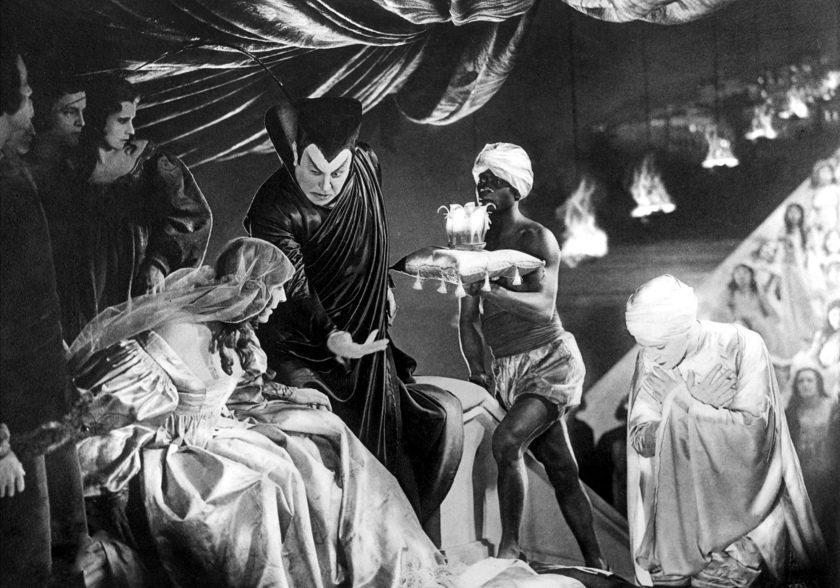 Peter Cushing may well have had legendary German filmmaker F. W. Murnau’s Faust (1926) in mind, when he said that he found a creaking door and half open coffin as disturbing as any amount of visceral gore or special effects.

Murnau’s classic is the perfect example of why the medium of silent film could have been created for the horror genre: a subject which is often more effective when atmosphere and tension are built through subtle visuals, as opposed to the increasing dependence on gruesome set pieces as seen in much modern horror, and that speaks volumes when there is silence. As a result many horror films which emerged during the early decades of the twentieth century, when cinema was in its infancy, remain equally effective today.

The story of Faust – an aged scholar who enters into a pact with the devil in the mistaken belief that as a result he can save the lives of the inhabitants of his hometown which is being decimated by an outbreak of the plague – is one such example. Much of its appeal, as with many which take their essence from folklore – is the universality of its message. Everyone, no matter where they come from or in what era they live, understands the basic subject of the eternal fight between good and evil. The fact that the forces of good in these stories usually win in the end may not, on the face-of-it, always appear true to life. Nonetheless legends and folktales frequently offer a sense of cohesion and moralistic hope in our often turbulent world.

During horror’s long and storied history – both in written form and more recently on the cinema screen – the rich and varied subject of European legend has created some of the genre’s most memorable moments. Murnau’s Faust is part of a tradition which flourished during the early years of German cinema. Whether due in part to their folkloric tradition, or from the fact the country, along with the rest of Europe, was still recovering from the traumatic aftermath and influences of the the First World War, horror was a popular subject matter for German filmmakers at the time. Some of the greatest early works in the genre – outside of those produced by the big Hollywood studios – came from Germany, with such classics as Das Cabinet des Dr. Caligari (1920), Der Golem, wie er in die Welt kam (1920) and Vampyr (1930) all originating from the country.

However two films more than any stood out, personifying a feeling of surreal and lonely otherworldliness, elements which are amongst the basic essences of true horror. Both Nosfertau (1922) – perhaps one of cinema’s most unsettling and haunting interpretations of the Dracula legend – and Faust which followed four years later and was to be the last film its director was to make in his homeland, shared many similar qualities, such as heavy, foreboding atmospheres, stark, minimalist settings and casts of bizarre and troubled characters. All of which isn’t surprising considering both films were the handiwork of Murnau.

Faust – the film which Japanese director Shinji Aoyama rates amongst the greatest ever made and thats devilish opening sequences are thought to have influenced the ‘Night on Bald Mountain’ segment from Disney’s Fantasia (1940) – and the way it comes alive on screen still makes chilling viewing ninety years after its initial release. From the opening in Faust’s plague ridden hometown, to the scene’s in his study heavy with the air of an alchemist’s lair and where he, in despair denounces God – setting in motion the disastrous train of events which will eventually destroy the lives of himself and those he loves – everything is imbued with a sense of the death and decay which pervaded much of the Medieval period in which the story is set.

Later as the story progresses it focuses on Faust being given his youth back by Mephisto in exchange for his soul, and his love for a young girl called Gretchen (played by the German actress Camilla Horn, in a role originally intended for Hollywood star Lilian Gish). Much of the proceedings during this part of the film (lighter in tone and subject, though with a dark seam running at their core) play out against backdrops of a brighter palette, serving only to heighten the darker periods which bookend the film’s main body. Murnau, in conjunction with German cinematographer Carl Hoffmann – who had worked on Fritz Lang’s legendary Dr. Mabuse (1922) and Die Nibelungen (1924) – created a world on screen of fantastical proportions. Fairytale cottages surrounded by beautiful gardens made the perfect setting for Faust and Gretchen’s doomed love story to play out in. These were later juxtaposed, during the film’s heady finale, against a medieval town of angular houses with gabled roofs and twisted cobbled streets along which rampant hoards of vengeance seeking yokels thronged, a staple element in European themed horror cinema for years to come.

The subject is also an excuse for the creation of countless bizarre animals, imaginary beings and inexplicable situations, which lend themselves perfectly to the horror genre. In Murnau’s retelling of the Faust legend these flights of fancy are taken to new levels. From the central character of the devil himself (in the the form of the cunning and sly Mephisto), to Faust’s own magician-like aspirations as well as flying animals, the Horsemen of the Apocalypse, damsels in distress and strange potions, the screen comes alive with an endless array of the strange and curious.

The byways of cinematic history are strewn with talented individuals (both from behind and in front of the camera) who died tragically young; what magic would they have gone on to produced had they lived? The German director F.W. Murnau was one such person. Born on the 28th December, 1888, in Germany’s Province of Westphalia, Murnau died tragically in a car crash in Santa Barbara, California, forty two years later. During a short career which spanned only twelve years, he masterminded some of early cinema’s most influential and renowned works including several – such Der Janus-Kopf (Dr Jekyll and Mr Hyde / The Head of Janus) (1920) and ScholB Vogelöd (The Haunted Castle) (1921) – which could be said to fall within the wider horror remit. Many of the films he made have been lost in the interceding years. However watching those that have survived, it is not hard to see the talent and imagination of a man who, had he lived, one can only imagine would have gone on to produce more weird and wonderful cinematic visions. 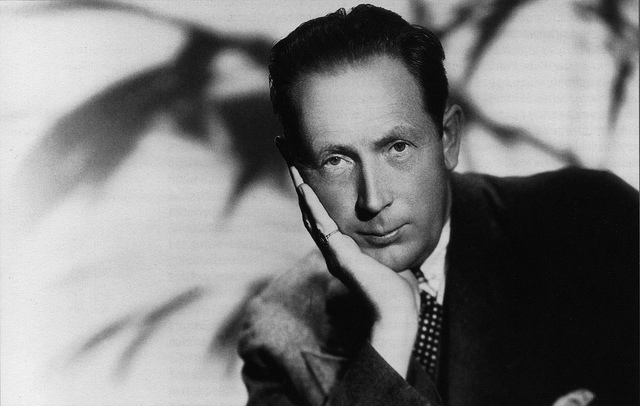 Gösta Ekman, who played the title role of Faust, also had a relatively short life, dying at the age of forty seven. Unlike Murnau however, Ekman had a prolific career starring in almost forty films as well as countless stage productions which earned him the title of Swedish theatre’s most legendary performer. In Faust he is given ample opportunity to display his renowned ability for portraying a wide range of ages, playing Faust as both an aged man and much younger, virile character.

Though, by dint of its very title, the film revolves around the inner turmoil, angst and tribulations of Faust, the significant individual that stands out when reflecting upon the film isn’t him. From the moment Mephisto (a chief demon of traditional German folklore) appears on screen – making a bet with one of Heaven’s principle angels that he can win the soul of a righteous man and in the process gain dominion over the earth in the name of the Devil – it is this sly, insidious and deceptively benevolent man who is the film’s most memorable character. Following his initial appearance in the traditional demonic form of winged and horned beast – he takes on human appearance swathed in a suit and cloak of liquid black satin, as he spreads and seeps his evil treachery into every aspect of the lives of those he meets. The embodiment of Mephisto by Swiss actor Emil Jannings was praised as a standout portrayal at the time by The New York Times which, in their review of the 7th December, 1926, referred to Jannings’ performance as masterful, calling him a ‘sly, busy Satan, who, with a wink and a grim laugh, gloats over the misery he causes’. Jannings (who became the first non-American actor to win an Oscar for his leading role in The Last Command (1928)), plays the insidious character of Mephisto with a commanding presence which becomes the viewer’s sole focus of attention whenever he is on the screen. 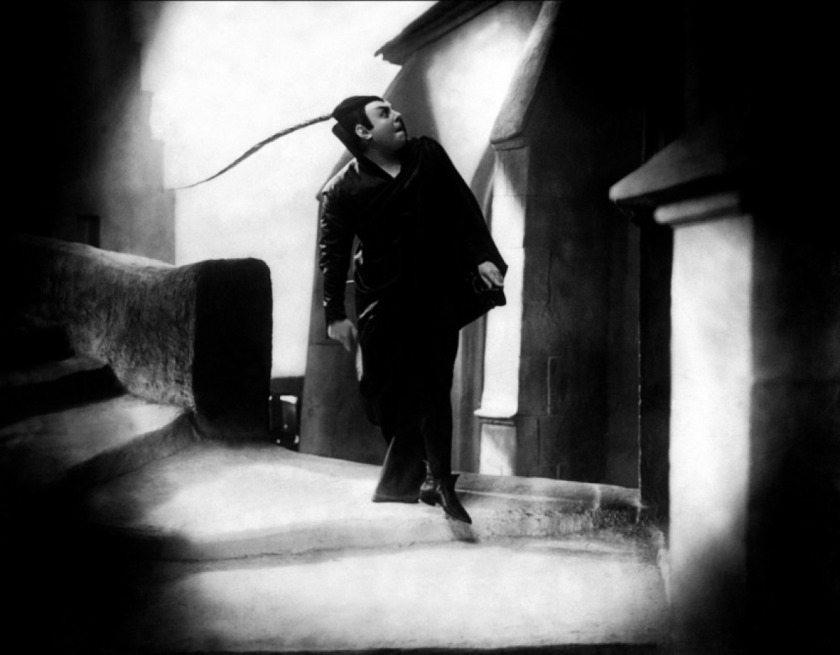 The stories which surround Murnau’s film, particularly in the years following its release, are almost as legendary as that of Faust itself. The director, a perfectionist who laboured over the minutest detail, made several different versions of the film, of which five are known to still exist, including two German editions, a French version, a bilingual European version and an edition prepared by Murnau for MGM in America. These versions differed in various ways with everything from missing scenes to the use of different costumes and even actors. It was those made for the home market however which were considered the archetypal editions, but which until recently were not seen outside of Germany, making the new release by the Masters of Cinema label, reconstructed from Murnau’s favoured domestic market edition, of particular significance.

Faust is the embodiment of Peter Cushing’s mantra, the perfect example of how style – in the field of horror – will long outlive the modern fixation with gratuitous, in-your-face frights.