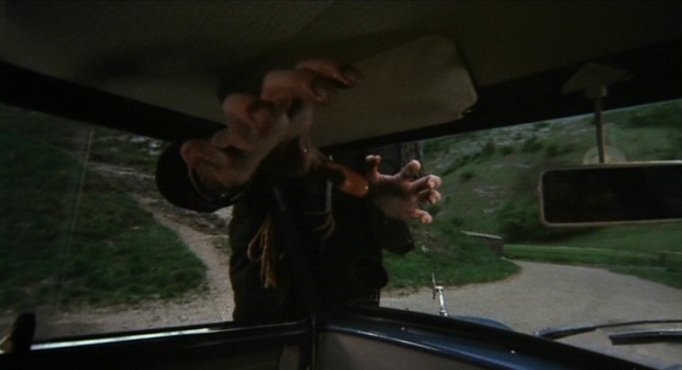 The first time I came across The Living Dead at Manchester Morgue – also known under several other names: Let Sleeping Corpses Lie, Non si deve profanare il sonno dei morti (Do Not Profane the Sleep of the Dead), Don’t Open the Window and The Living Dead – was in a feature in an old copy of the 1970s magazine House Of Hammer. When, after many years, I eventually saw it I was, I’m pleased to say, not disappointed. Unlike many films you read about and picture in your imagination as something mysterious and wonderful, but which fall way below expectations when you actually watch them, here was something which lived up to, perhaps even surpassed, my wildest fantasies.

The premise of the film is reasonably straight forward – it is refreshing for once not to have a convoluted storyline get in the way of the proceedings on screen. George (Ray Lovelock) and Edna (Cristina Galbó) find themselves inadvertently thrown together whilst each travelling separately to the Lake District – George to hook-up with some friends and Edna to see her sister Katie (Jeannine Mestre) and brother-in-law Martin (José Lifante). As strangers to the area the couple find themselves come under suspicion with the police after a series of grisly and inexplicable murders take place in the vicinity. However, as George and Edna begin to piece together the real reasons behind the vicious killings, it becomes a race against time before they all succumb to the strange and deadly ‘disease’ which is plaguing this wild and beautiful area of England’s Lakeland.

The only real problem, if any, with The Living Dead at Manchester Morgue is what to call it. Not only does this rarely seen gem of cinematic gore – widely considered to be amongst the finest hardcore zombie movies ever produced – disguise itself under several non-de-plumes (as highlighted above), but it is also a film which can have various interpretations.

Undeniably falling within the remit of horror, it is inevitable that the film’s more gruesome parts are amongst its most memorable. These elements impinge all the more however, due to their infrequency. Unlike many modern horror films which bombard you with long segments of unrelenting viciousness, here the shocks come short, sharp and unexpectedly. Take for instance two of the most notorious scenes – involving a policeman and later a hospital receptionist. Though, when they happen, they are lingered on in loving detail (particularly the receptionist’s death which gives a new meaning to ‘below-the-belt’), they are generally thrust upon you with very little build up, only adding to their overall impact both visually and mentally.

The film can also be read as a comment on society, in the same way as George A. Romero’s Dawn of the Dead (1978) was widely seen as a satire on America’s consumer, ‘shopping mall’ mentality. Here the film takes a sideways swipe at man’s growing obsession with and dependency upon industrial assistance in everyday life and the resulting insidious pollution it has on humanity as a whole. From the opening scenes in a smog choked city – the fact that it’s identity is never fully established, only widens the film’s universal message that this could be happening anywhere – to the actual means which unwittingly wakes the dead, everything here comes with a subtle, underlying warning. What can be seen in many ways as progression, may in fact be the ultimate cause of our destruction.

An Italian / Spanish co-production (which goes some way to explaining its no-holds-barred viscerals) the film is very much of its time with a downbeat ending in keeping with its overall grimy feel – no cosy, feel good Hollywood finish here. That the establishment – the police (in the form of American legend Arthur Kennedy – the film’s only concession to mainstream cinema), scientists and medical professions – eventually, in one way or another, get their just deserts, could be interpreted as poetic justice for their dismissal throughout the film of what they see as the younger ‘hooligan’ generation of society, in the form of George and Edna.

However watching The Living Dead at Manchester Morgue one factor stands out above all others – namely its overriding air of otherworldliness. Never has England’s Lake District been portrayed more beautifully, or sinisterly, and its rugged and lonely terrain reflects perfectly a story that plays on its character’s isolation both mentally, socially and physically. If ever a film deserved to be brought to the attention of a wider audience it is this one. There again – like the beautiful area in which it’s set – promoting its appeal to the general public may destroy the very qualities which lend it it’s unique appeal.