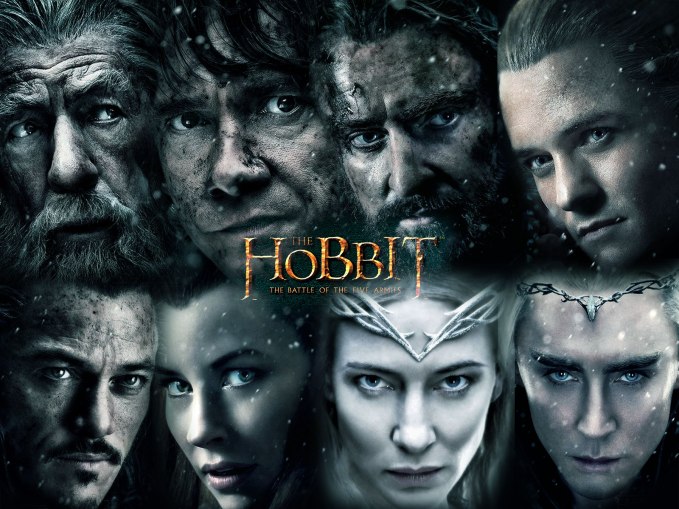 As they say all good things must come to an end, and director Peter Jackson’s epic retelling of J.R.R. Tolkien’s fantastical tale The Hobbit, comes to a fitting conclusion with the release of The Hobbit: The Battle of the Five Armies (2014).

The cataclysmic events which were about to engulf the hobbit Bilbo Baggins (Martin Freeman), the wizard Gandalf (Ian McKellen) and their band of dwarf companions at the end of The Hobbit: The Desolation of Smaug (2013), culminate in a battle which could herald the end of life in Middle Earth as they know it. Will the group of friends be able to turn back the tide of darkness which threatens to engulf their world, and if they do which of them will survive to see the outcome.

Tolkien’s bestselling children’s book The Hobbit, first published in 1937, was also known under the equally intriguing title There and Back Again. With this in mind the final instalment of Jackson’s trilogy based on the book could as easily have been called ‘Neither Here Nor There’. Though it is everything you’d expect from the filmmaker whose name is now a byword for cinematic extravaganzas, neither does any aspect of the film truly stand out in the viewer’s mind once the final credits role.

As said everything you’ve come to expect from New Zealand born Jackson is present, as are all the necessary elements, characters and key events from the book. Jackson – and his troupe of collaborators both in front of and behind the camera – has, through his visionary Lord of the Rings and Hobbit film trilogies, made the world of Middle Earth and everything which inhabits them his own. His imagining – and make no mistake, when it boils down to it, the vision on the screen is Jacksons – of the people and things from magicians, dragons and copious little people, to talking trees, mutant spiders and the odd bit of bling jewellery, are now as much part of the Middle Earth legend as Tolkien’s original genre forming novels.

Which really leaves little to say about this film. As with any big screen treatment of the Lord of the Rings or Hobbit books there is not much room for personal interpretation. Tolkien was such a descriptive writer, bringing his visions to life so vividly on the page, that any filmmaker taking on the task of putting his works on the screen is left very little leeway for self expression. Clearly how they see the individual characters physically is open to their own slant, but the stories, situations and relationships which form the basis of the proceedings are pretty much cast in stone, and as such cannot be strayed too far from. Jackson may have tried to expand on Tolkien’s original works – particularly where stretching the single volume Hobbit over three two hour plus films was concerned – but even he couldn’t take too may detours from the original.

And this is where The Hobbit: The Battle of the Five Armies comes up against a major problem – namely that nothing really happens, save one rather long battle sequence (as the film’s title implies). The result leaves the viewer with the feeling that this film is just there to tie up the loose ends, which it admittedly does very cleverly, whilst introducing you to the beginning of the Lord of the Rings trilogy. Some characters leave in one way or another whilst others start on the journeys to what they later become. By the end however, you can’t help but feel that Bilbo’s epic quest could easily have been told in two films and that this third instalment was there simply so the filmmakers could string the saga out a little longer. Saying this the film does look spectacular with the characters and their habitats beautifully fleshed out and brought to life on the screen. Even so, you feel you know Bilbo, Gandalf and the other inhabitants of Middle Earth – both good and bad – so well now, that there isn’t much left for Freeman, McKellen and the rest of the cast to explore.

The Hobbit: The Battle of the Five Armies, as said, ties up the loose ends from its two predecessors, as well as seamlessly introducing us to the adventures of the Lord of the Rings films, making all six outings come together as a whole. Though there are enough other books based around the history and events of Middle Earth to make a dozen more films, let’s hope that Jackson decides to finish on a high and resist the urge to visit Tolkien’s world yet again.