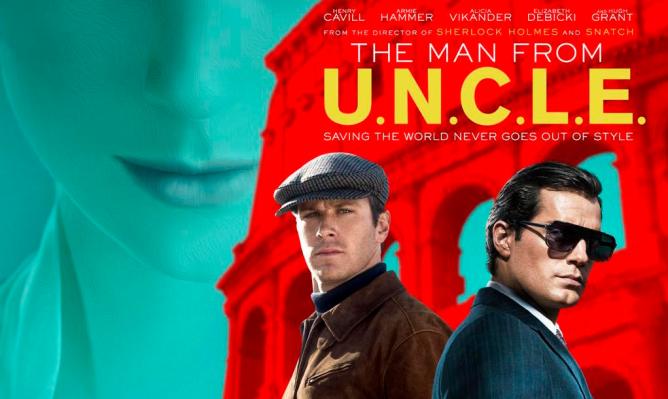 Don’t let the fact that David Beckham is listed in the credits of director Guy Ritchie’s action comedy put you off. Old ‘Golden Balls” himself is only seen fleetingly in The Man From U.N.C.L.E., which means that his presence fortunately doesn’t detract from what is a marvellously vibrant reimagining of the cult 60’s T.V. programme of the same name.

Stylish American government agent Napoleon Solo (Henry Cavill) is forced against his will, by Alexander Waverly (Hugh Grant) – head of U.N.C.L.E (United Network Command for Law and Enforcement) – to join forces with broody Russian operative Illya Kuryakin (Armie Hammer) and delectable German defector Gaby Teller (Alicia Vikander) to fight global evil. Their first mission is to thwart the plans of a shady organisation led by the mysterious Victoria Vinciguerra (Elizabeth Debicki), who plans to shake world peace with the threat of a nuclear Armageddon. That they approach their task with an air of sophisticated flair and good taste goes without saying. Whether this is enough to see them succeed is another question altogether.

Filmmakers are always on dodgy ground when they decide to re-interpret classic T.V. or film for modern movie lovers. Stick too closely to the original formula and the result baffles and confuses younger audiences, with what they see as old and twee references to the past – which can otherwise be read as things which would appeal to their parents. Stray too far into contemporary environments – in an effort to make the material relevant to the here and now – and you risk alienating those who hope the film will reawaken childhood memories of their favourite heroes on the big screen.

Lessons which – considering the constant backward glances Hollywood casts for inspiration – you would think they would have learnt from by now. However for every successful Star Trek franchise, you get an Avengers abomination: the 1998 film of the surreal 60’s T.V. show simply proved that no matter how much money and SFX you throw at something, it won’t work if there isn’t some spark between the central characters. One director however who seems to have mastered the knack of re-inventing past glories for a new generation is Guy Ritchie. Having successfully given Sherlock Holmes and his medical sidekick a shot in the arm, Ritchie has now turned his attention to an era and group of characters which are suited perfectly to his sharp eye for quick pace and smooth style. Indeed the cast, and viewer, are hardly given time to catch their breath as The Man From U.N.C.L.E.‘s action races across Europe through a series of preposterous situations which would have challenged James Bond at the height of his 60’s heyday.

The film smacks heavily of the laddish metrosexuality you expect from a film by Ritchie, not least because of the aforementioned presence of Beckham: where else could you find two hot blooded heterosexual males at ease discussing the edge Chanel has over YSL, as Solo and Kuryakin debate how their protégée Gaby should be dressed – an Eliza Doolittle for the late twentieth century. This however is the film’s strength. Forget the usual somewhat convoluted spy scenario around which the perfectly cast Cavill, Hammer and Vikander negotiate their way: fortunately the witty story and script by Ritchie, Lionel Wigram, Jeff Kleeman, David C Wilson and Sam Rolfe falls just the right side of complex, never becoming to clever either for its or the audience’s own good. Instead everything – cast, story and settings – seem present simply to carry the viewer from one excess of enviously stylish 60’s living to another as Solo, Kuryakin and Gabby pursue, and are pursued by, a band of baddies who could only exist in the world of imaginary espionage.

Ultimately of course, this film is nothing more than stylishly fun fluff. Ritchie however infuses it with a lightness that should carry it effortlessly through the inevitable sequels, which are probably being concocted as we speak.