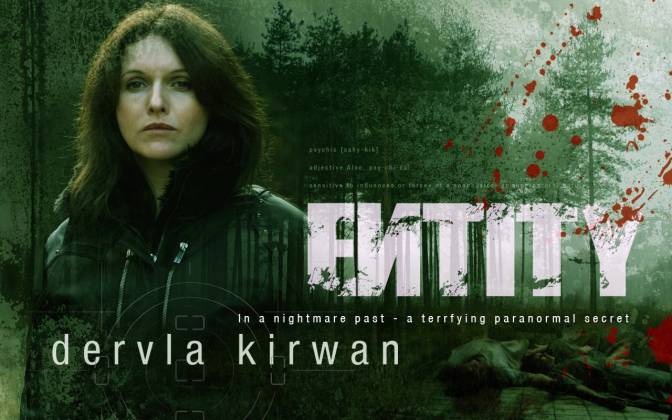 There was a time when the term ‘horror film’ meant just that. Admittedly however, it seldom required much more than keeping the landing light on at night to dispel any fears that something might be lurking in the dark once the film ended. Now your home could be plunged into complete darkness as the result of a total power cut after you’ve just finished watching the latest horror release, and you’d have no more nightmares than if you’d sat through an episode of Scooby Doo! The scariest thing about Entity (2012), the film from this category by director / writer Steve Stone, and starring Dervla Kirwin, Charlotte Riley and Branko Tomovic, is how it managed to win two awards at the London Independent Film Festival, both as Best Sci-fi / Horror Feature and Best Low Budget Film. If this was the best it wasn’t saying a lot for the other entries.

Three British television documentary makers, Kate Hansen (Riley), Matt Hurst (Rupert Hill) and David Hamilton (Oliver Jackson), along with psychic Ruth Peacock (Kirwin) and their Russian guide Yuri Levkov (Tomovic), venture into the forests in a remote area of Russia in order to investigate the truth behind the deaths of thirty two bodies found in the area twelve years previously. As they head deeper into the area they come upon a disused hospital facility, which houses a dark secret that could threaten all their lives.

Someone should tell filmmakers that lost footage as a basis for horror films has had its day. Any originality the method might have shown when first seen in films like The Blair Witch Project (1999) has long since died. This means that the only point of interest in this new variation is how they fooled someone of the calibre of Kirwin (who once showed some promise as an actress) into getting involved in this dire escapade in the first place. Here she is reduced to wandering round a damp field and then a series of dimly lit corridors pleading with what remains of the rest of the cast to “get me out of here”! By the end of eighty seven minutes (if you make it that far) you’ll wish they had taken heed of her entreaties, for your sake as well as hers.

I wish I could say something at least remotely positive about Entity. However, before it finished I was as lost and confused by the film as its characters themselves seemed to be, so I guess we had better leave it there.