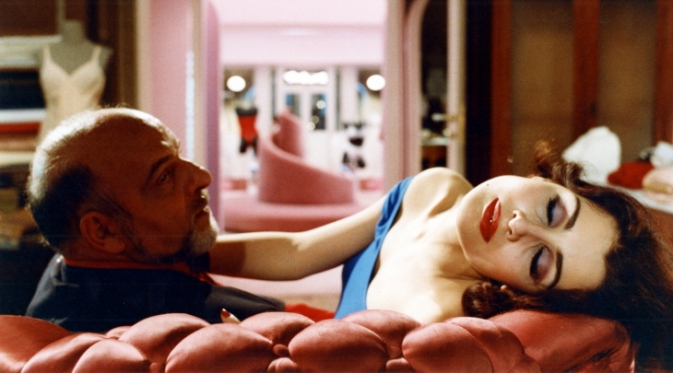 In All Ladies Do It, loosely based on Mozart’s opera Così fan tutti (of which the film’s title is a direct translation), Diana (Koll) is happily married to Paolo (Lanza). Unfortunately Diana’s sexual appetites are stronger than those of Paolo and unable to get satisfaction from him, she sets out on a voyage of self discovery and fulfilment much to her husband’s anger and humiliation.

Which is in actual fact a good summation of Brass’s work, where stunning Venetian locations, dreamy artisan interiors and melodic scores by composers like Ennio Morricone, strive to lend his films an air of bohemian acceptability. All Ladies Do It in particular has scenes which look like they were lifted straight from the pages of a late 1980’s issue of British Vogue, with the character of Diana running through the rain lashed alleyways of Venice in sharply cut suits and jauntily angled, picture hats.

However any in-depth study of the deeper content and meaning of these films is, on the whole, unnecessary as, when stripped bare, their story-lines clearly exist purely to link various scenes centring around the often sordid sexual proclivities of the individuals involved. Instead, if you really feel the need to watch the films of Brass (purely as an academic exercise in order to broaden your experience of the overall, cinematic oeuvre), then they should be taken purely on their visual merits and quickly crossed off the your ‘to experience’ list. The interiors for the films evocatively capture the eras in which they are both set – a heavy 1940’s wartime mustiness for The Key, highlighted by the complete opposite in the austere, almost clinical late 1980’s / early 90’s air of All Ladies Do It. These, along with the otherworldliness of the Venice exteriors, form a perfect backdrop against which to show the sexual shenanigans of a group of characters with whom the audience feel little connection, neither sympathetic or otherwise – one can’t escape the sense that the cast are there simply to perform a sexual function with, despite their best efforts, little emotion involved.

Ultimately, if you feel the need to watch Brass’s films, they should be approached in the same way as most pornographic material – briefly ‘stimulating’ when they last, but providing little in the way of a deep or meaningful experience.