You’d be forgiven – considering those involved – for mistakenly thinking that The Family would make for reasonably passable entertainment. Unfortunately this comedy crime thriller, featuring Robert DeNiro, Michelle Pfeiffer and Tommy Lee Jones, written and directed by Luc Besson and produced by Martin Scorsese – fails to live up to expectations.

For their own protection New York mafia lynchpin Fred Blake (DeNiro) and his wife Maggie (Pfeiffer) – along with their children Warren (John D’Leo) and Belle (Dianna Agron) – are sent to live in a sleepy French town under a Witness Protection Programme. Any hope that they would melt unnoticed into the background are dashed however, when their violent and gangster’esque tendencies come to the fore, with chaotic consequences all-round.

It’s a dead cert that a film involving Scorsese and DeNiro is going to involve some degree of mayhem and carnage. Indeed you’d feel short changed if there wasn’t the occasional beating or stabbing in any film by two men who have built successful Hollywood careers around maiming and murder. However these actions don’t seem right in The Family. Much of the violence appears so out of place, and is sprung so suddenly, that it jars more than usual due to it unexpectedness. Take for instance Maggie’s fiery retribution on the locals she feels are slighting her as a foreigner in their midst. Or when Warren and Belle exact revenge on the kids at their new school who make their lives a misery. The resulting bloodshed on all accounts is so unnecessarily over-the-top that the viewer can’t help but be nauseated. 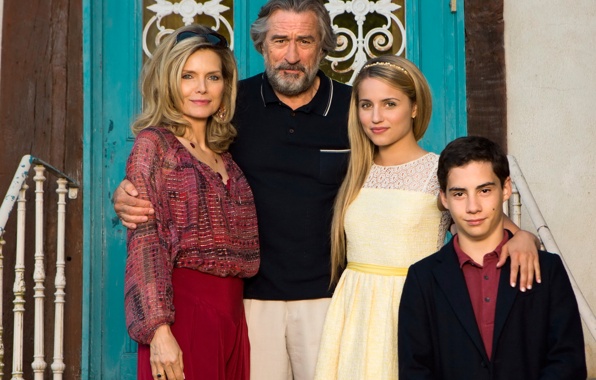 DeNiro, Pfeiffer and Lee Jones (as the officer in charge of the Witness Protection Programme), are as accomplished as you’d expect for actors of their calibre. The overall question which the film raises though is why you’d want to spend almost two hours of your time watching it. It may attempt a promising twist by making Maggie and the children as slick and heartless at killing as Fred – none of the usual innocent, unsuspecting family members so often seen in gangster bound dramas. However, despite Maggie’s underlying ruthlessness and Warren and Belle’s impressive dexterity with firearms, the pervading feeling the viewer is left with as the final credits roll is why this should be considered entertaining?

Beautifully atmospheric French setting and some vaguely amusing incidents aside, The Family, much like its characters, is something you’d best steer well clear of.