Disney’s timeless classic Mary Poppins (1964) is one of the few films which virtually everyone with even a passing interest in cinema, seems to know. What most people aren’t aware of however is the true story of P.L. Travers, the woman who gave life to the iconic, no-nonsense nanny who brought magic into the lives of the Banks family at Number Seventeen Cherry Tree Lane. They may have heard about the legendary disagreements between Pamela Lyndon Travers (born Helen Lyndon Goff), who was renowned for the almost obsessive protection of her beloved creation, and Walt Disney, equally well known for being a man who never took no for an answer. What they may not realise though is the degree to which Travers’ own damaged childhood in Australia went on to shape one of the most beloved fictional characters of all time. Well if this is true then the new Disney film Saving Mr Banks, that closed 2013’s London Film Festival, and which stars that most English of actresses Emma Thompson as Travers, alongside the archetypal Hollywood star Tom Hanks as the jovial Disney, aims to set the record straight.

For a period of twenty odd years master storyteller Walt Disney, courted writer P.L.Travers, trying to persuade her to let him bring the magical Mary Poppins to the big screen. Eventually in 1961, Travers agreed to travel to Hollywood to meet Disney and discuss the development of the film. The following fortnight which Travers spent in America, created a drama almost as legendary as the film it produced.

When analysed Saving Mr Banks is actually a film of multiple doubles. Firstly it shows both Travers and Disney to have had two sides to their personalities – Travers’ prickly exterior hiding the private person haunted by memories of a childhood where she had been forced to grow up much quicker than she ought, and Disney, whose congenial outward appearance, disguised a ruthless and singleminded businessman, unlikely (despite his displays to the contrary) to let a little thing like sentimentality get in the way of a money making project. 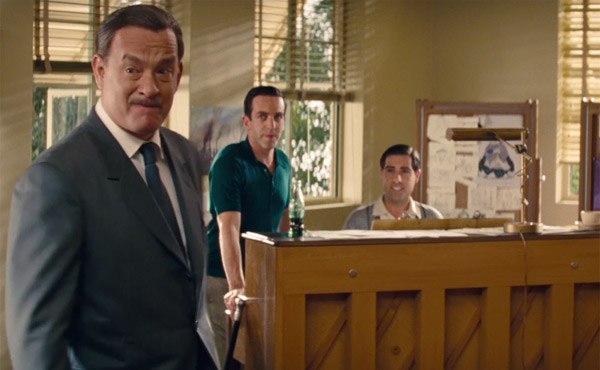 The film’s relatively straight forward story focuses in the main on the programme of persuasion which Disney embarked on, in order to get Travers to allow him to recreate his interpretation of her books. It’s no frills approach allows room for each of the main actors to bring to life on screen a group of highly complex individuals in a way which, though it may not necessarily make you like the characters, does create a degree of sympathy for each of them. After watching the film’s depiction of her early years – with a father (played with uncharacteristic mellowness by Colin Farrell) who escaped his humdrum life as a bank manager (inspiration for the character of Mr Banks) with the help of his vivid imagination and a bottle of whiskey, her well meaning, yet hopelessly overwhelmed mother (Mrs Banks) and a wealthy aunt who seemed to appear from nowhere shortly prior to her father’s death, bringing a semblance of order to the young girl’s life (Mary Poppins) – you can understand why Travers felt so attached to her creation, and was so distraught when she saw what Disney did to it. 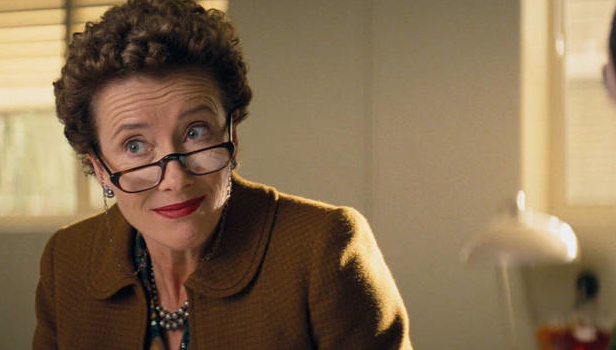 Equally the film subtly shows Disney’s well documented darker side. Though on the face of it he was a warm and friendly man – he insisted that everyone including his staff call him Walt – who won Travers over in part by constantly telling her how much her stories meant to his daughters, he clearly kept the long term goal in sight. Despite agreeing to many of Travers’ demands, the final film was very much in the ‘Disney’ mould, complete with an all singing, all dancing Dick Van Dyke and troupe of animated penguins, which particularly upset Travers. The story goes that Travers, on seeing the finished film, complained about the animation to which Disney replied, “too late, that ship has sailed”. A point which, like Saving Mr Banks, merely emphasises how ruthless he could be when wanting his own way.

Saving Mr Banks itself can also be seen as having a multifaceted approach, almost like two films within one – the first focusing on the period during the making of Mary Poppins, the second recounting Travers’ unorthodox upbringing in the Australian outback. Critics have said that the real magic of Travers’ books was that the reader seldom knew where the fantasy ended and reality started, and vice versa. In Saving Mr Banks director John Lee Hancock and writer Kelly Marcel have achieved something similar, as the film’s narrative flits between turn-of-the-century Australia and 1960’s California, seamlessly melding the two periods of Travers’ life to explain how this woman became what she was and why she hung onto control of her literary creation with such tenacity. Marcel’s screenplay also achieves the unenviable task of creating fresh, original and engrossing entertainment, whilst staying respectful to something which means so much to so many, by including snatches of songs and iconic imagery from the original film.

Too many of today’s filmmakers try to better past films by adding to or remaking them in their own image, failing dismally in the process. Saving Mr Banks on the other hand has simply complimented its predecessor by bringing its backstory alive.