Nowhere to Go, starring George Nader, Maggie Smith and Bernard Lee, and directed by the legendary Seth Holt, is a film which still packs a punch almost sixty years after its first release.

Paul Gregory (Nader) is a crook. Stealing a valuable coin collection from vulnerable widow Harriet Jefferson (Bessie Love), he sells it, puts the money in a safe deposit box and allows himself to be captured. Expecting to get five years maximum he is shocked when he is jailed for ten. With the help of his friend Victor Sloane (Lee) Paul escapes and goes on the run, in the process meeting socialite Bridget Howard (Smith). Bridget is determined to help Paul, but for how long can they evade the police whose net is gathering ever closer. 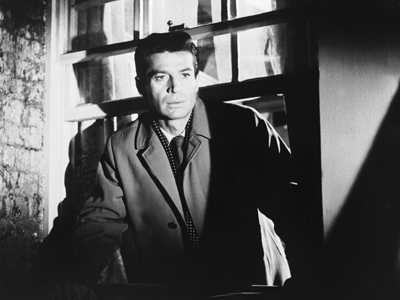 Made by Ealing during its final years – it was to be their penultimate production – Nowhere to Go is significant for several reasons. Not only was this story of a crook on the run one of the studio’s only forays into the murky world of film noir, but it is also notable for introducing a young Maggie Smith in her first credited role. Playing a 1950’s ‘It’ girl Smith stands out from a cast – including James Bond’s future boss Bernard Lee – in a part which saw her nominated for the BAFTA Award for Best Newcomer. Watching the film the stylish edge which has made Smith one of the world’s most revered actresses is evident even then, as she imbues her character with an air of innocence dashed with feisty independence.

Smith aside it’s Nader who stands out in the central role of the anti-hero, with no bones being made about his character being an out and out bad boy. The viewer however can’t help rooting for him, especially during several impressively staged chase sequences where he plays cat and mouse with the police, culminating in a tense climax amidst the wild and desolate Welsh countryside.

The film is also famous for its nine minute opening sequence depicting Gregory’s audacious jail break which is virtually silent, save for the the commotion once the prison guards find out what is happening, accompanied by a strident jazz theme by Dizzy Reece. Coupled with the fact that it is really just one long chase as Gregory constantly tries to evade capture by the police and a host of double crossing criminals, and this is a film impressive for its ability to actually do very little, yet hold your attention for its duration.

Released on DVD by Studiocanal, Nowhere to Go is a classic exercise in suspense which could teach many modern filmmakers a thing or two in the art of saying more with less.