Though Wes Craven’s The People Under the Stairs – starring Brandon Quintin Adams, A. J. Langer, Everett McGill and Wendy Robbie – may not be one of the master of suburban schlock’s best efforts, it does create a sense of tension seldom felt in horror cinema.

There’s a local house which kids are warned never to go near, as the owners are a little odd to say the least. So its is with trepidation that Fool (Adams) is persuaded by his sister’s boyfriend Leroy (Ving Rhames) to accompany him and his mate Spenser (Jeremy Roberts) when they break into the house to steal some hidden money. They do indeed find something hidden in the house, though perhaps not quite what they were looking for. 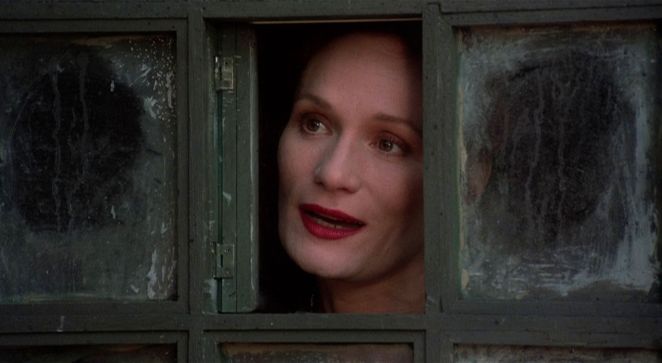 Craven – who was responsible for causing more disquiet amongst the inhabitants of suburban America than any other purveyor of horror – had a thing about houses. Several of his movies, including The Last House on the Left (1972) and A Nightmare on Elm Street (1984), were based in and around comfortable family homes. However this trait reached its peak with his seldom seen The People Under the Stairs, in which the house which hides much of the film’s horror takes on the persona of a human character. Indeed the said house – with its forbidding exterior and a world of hidden corridors and tunnels beneath the surface, in which its owner’s unfortunate victims live – is frequently the most interesting thing on display. The real trouble is, unlike the house the people are, on the whole, disappointingly two dimensional. By the end of the film you know very little about the various disparate individuals, and furthermore – with the exception of Fool (imbued with a feisty resilience and juvenile ingenuity by the young Adams) – you don’t really care about them either: though the villains – ambiguously referred to throughout as ‘Man’ and ‘Woman’ – lack of substance does, admittedly, add to their overall creepiness.

The film’s other major drawback is its inclusion of random and surprising gore. Being a Craven film, a degree of explicit nastiness is to be expected – indeed required. However the majority of the violence here this is done with a fair degree of black humour, to the extent that when ‘Man’ decides to carve up a hapless intruder and feed him to the creatures in his basement, the graphicness of the murder is intensified by its unexpectedness. Which is a good word to describe the overall feeling of one of the stranger entries in Craven’s frequently odd oeuvre.