Maîtresse is one of those films which has built its reputation on controversy. Though undeniably shocking in parts, director Barbet Schroeder’s tale of S&M amongst the decadent bourgeois of 1970’s Paris, starring a young and surprisingly attractive Gérard Depardieu along with Schroeder’s real life wife Bulle Ogier, is relatively tame when compared with much of today’s mainstream cinema.

Petty thief Olivier (Depardieu) gets more than he bargained for when he breaks into the apartment of the beautiful Ariane (Ogier), and discovers a fully appointed torture chamber hidden in the basement. In reality Ariane is a ‘Maîtresse’ who’s sole aim is to provide her clients with the ultimate satisfaction through various S&M scenarios in her black marble dungeon. When Olivier finds himself falling in love with Ariane he determines to help her break free from what he sees as her entrapment within a dark and seedy world. However as their relationship develops it becomes increasingly clear to Olivier that Ariane may not be as keen as he is, for her to leave her secret and lucrative double life behind. 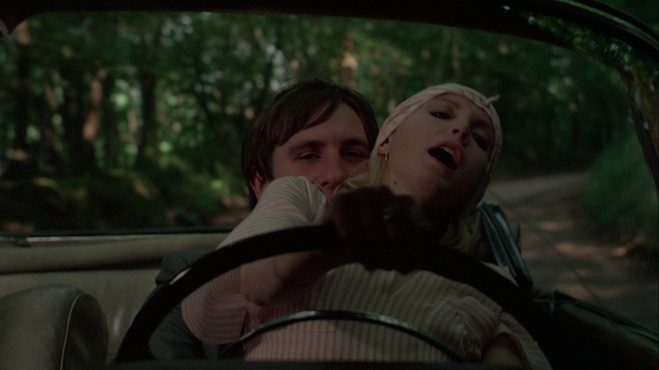 As with many controversial films the question most likely to arise concerning Maîtresse, if viewed dispassionately, will be what all the fuss is about. Though the scenes most fiercely debated – namely one in the torture dungeon and another at a country house party, which one feels are ultimately placed there to shock as much as to titillate – are indeed difficult to watch, coming as close to the verge of hard core pornography as acceptable, the rest of the film is relatively pedestrian.

If you can see past the obvious sexual elements, what you actually have is an effective portrayal of two people’s burgeoning love as they come to understand and accept the foibles and intricacies of each others multifaceted personalities – ie. the requirements of any relationship if its to work. The film is also beautiful to watch. Both the evocative costumes by Karl Lagerfeld and the juxtaposition of Ariane’s sleek subterranean playpen and the shabby chic of her friend’s country châteaux, capture perfectly the sense of effortless taste innate in the French.

Ultimately Maîtresse is a strange film which appears too clever for its own good. The expression ‘each to their own’ is most apt in its description and, though undoubtedly not to everyone’s taste, it does hold a certain degree of interest if only for its novelty factor.