Watching An Inspector Calls – the mystery drama directed by Guy Hamilton and starring Alastair Sim, Arthur Young and Bryan Forbes – one is presented with a masterclass in tension and unease. This screen version of J.B. Priestly’s classic play, released by STUDIOCANAL to mark the film’s 60th anniversary, focuses on the hidden secrets between the members of an upperclass Edwardian family and how they are laid bare during the course of one fateful evening.

The Birlings are a rich and powerful family, of high standing in the local community. Unfortunately their carefully constructed facade of genteel breeding and moral superiority, begins to crumble under the relentless questioning of a mysterious police inspector, who invades their perfect world with tragic news which effects them all. 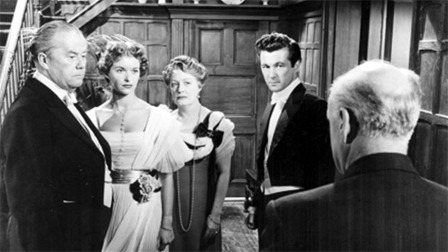 Many of cinema’s best examples are those which found their origins in the theatre. Due to the restrictions of the environment, stage plays often focus more on character, dialogue and situations, as opposed to elaborate locations or special effects – probably one of the reasons why so many film stars approach theatre work with trepidation. By their very nature plays emphasise the character, proving the skill of actors to capture emotion in all its myriad of human forms. Which is exactly the case with Priestly’s tense and engrossing depiction of an upper-class English family, and how their outer facade of social perfection is undermined when brought under the scrutiny of a mysterious police inspector.

The impression of this being a filmed play is never far from the viewer’s mind. Though several scenes take place beyond the walls of the Birling family home, the main drama unfolds virtually within a single room – their drawing room. However, where this air of restrictiveness could prove a distraction in other films, here it focuses the attention on the unfolding drama. The arrogance – frequently found in the upper-classes – of the Birling family, with their acute awareness of their standing in the local community and constant fear of how any hint of scandal may destroy it, is vividly brought to life by Young as Arthur, the pompous head of the family and Olga Lindo as his aloof wife Sybil. Equally sharp are Forbes and Eileen Moore as their children Eric and Sheila who, unlike their parents, show remorse when the error of their ways are made clear to them.

It is of course Sims though, who steals the show. His depiction of Inspector Poole – who may or may not be all he seems and provides the film with a twist ending – has a sinister air of otherworldliness which haunts the viewer as much as it does the characters, making An Inspector Calls linger in the mind long after it finishes.