Sitting through The British Guide to Showing Off is (I imagine) like a bad acid trip – loud, garish and leaves you with the worst come-down in history. This documentary about the alternative artist and sculptor Andrew Logan was I suspect intended to put him over to the public as an eccentric, fun-loving original. Instead you are left with the impression of an ageing queen not dissimilar to many you find haunting the seedier areas of London’s Soho on a Friday night.

The film’s main focus follows Andrew as he launches another of his Alternative Miss World contests, which he founded in the 1970’s as a showcase for bizarre, eccentric and ‘out there’ individuals. Held only occasionally, ie. when Andrew can find a sponsor (which included SWATCH one year) to fund the show, it has all the components of the regular Miss World (daywear, evening-wear etc) without any of redeeming qualities of exotic locations and beautiful people. Instead we follow Andrew as he explores some of London’s more dubious areas in search of a venue in which to stage the 2009 extravaganza, whilst the final line-up of contestants includes an odd mix (both female and male) of everyday, mundane individuals. 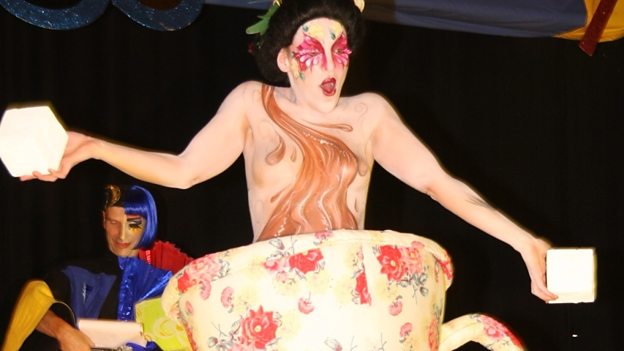 In the film’s favour you meet many of Andrew’s friends and collaborators including doyenne of British fashion Zandra Rhodes (who apparently designed Andrew’s hostess costumes for the event, which explains a lot) and fellow cross-dressing artist Grayson Perry (who manages to wear dresses with slightly more aplomb than Andrew). One of the highlights is when Andrew just picks up the phone to ask Ruby Wax (whose anarchic sense of humour is perfect for the wacky event) to be the show’s co-host. Disappointingly the biographical elements, which help explain how Andrew became the ‘phenomenon’ he is and which would have made for a much more interesting ninety minutes, play second fiddle to the main story (though I guess this was only to be expected).

Many people appear to love Andrew and his work. However, especially after watching The British Guide to Showing Off, you get the impression they say this simply to be part of the ‘in crowd’ when in fact, like the Emperor’s Clothes, there is very little of substance to Andrew and his eccentrically ‘British’ take on life.