What to Expect When You’re Expecting, the multi-tiered, ensemble comedy from director British director Kirk Jones starring, amongst others, Cameron Diaz, Jennifer Lopez, Dennis Quaid, Chris Rock and ….. Cheryl Cole (admittedly she’s only there for thirty seconds, but she is in it), is good fun as long as you’re not expecting too much.

The plot is a little convoluted (it’s not hard to follow, but with multitudinous strands it would take to long to explain it), so here is a quick overview. Five couples experience the ups and downs of pregnancy and childbirth, and in the process learn about themselves whilst dealing with the unforgettable experience of bringing a new life into the world. 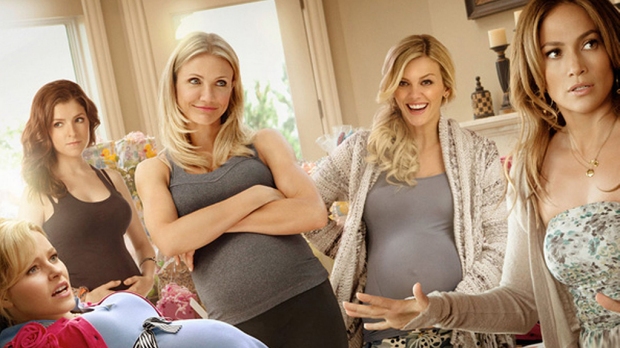 This film was never going to win any awards but as an example of how to include a multitude of Hollywood A-Listers (and Cheryl Cole) in the same film whilst allowing them all equal prominence, it is a competent and smart piece of film making. Like New Year’s Eve (2011), the story by Shauna Cross and Heather Hach, based on the best selling books by Heidi Murkoff, manages to bring the various stars together on a balanced footing which is no mean feat when when working with so many volatile egos.

The film’s defining quality – after its deft intertwining of the various characters stories, allowing them to intermittently cross each-others paths whilst never actually meeting until the inevitable hospital based climax – is it’s slickness. Jones never allows the pace to slacken, with one gag filled scene following quickly from the last, and though the much of the humour is derived from instances built around morning sickness (the opening scene involving the finale of a dance competition is toe-curlingly funny) and men’s frequent inability to deal with impending parenthood, the proceedings move so quickly that you are allowed little time to dwell on what could easily have been a series of crass scenarios. This may not be on the same level as Jones’ previous dryly humorous hit Waking Ned (1998), but that’s the price you pay if Hollywood offers you a mainstream chance built on the reputation of a smaller scale hit.

You will enjoy What to Expect when you’re Expecting much better if you accept it for what it is, a popcorn film – warm, fluffy and immediately forgettable.