Completing the BFI’s collection of ghost story adaptations which over the years became a staple of the BBC’s Christmas programming, come two chillers from M. R. James. A View From A Hill (2005), directed by Luke Watson and starring Mark Letheren, and Number 13 (2006), directed by Pier Wilkie with Greg Wise taking the lead, are a clear example of the BBC trying to revive the tradition they started in the late 1960’s – though unfortunately without the same degree of success.

A View From A Hill concerns a young museum curator called Fanshawe (Letheren) asked to catalogue the archeological collection of a country squire (Pip Torrens), who plans to sell it to raise some much needed capital. Leant some strange binoculars by his host to survey the surrounding countryside, Fanshawe is drawn to an area nearby called ‘Gallows Hill’. But the binoculars have mysterious properties and awaken something wicked with devastating results for Fanshawe. 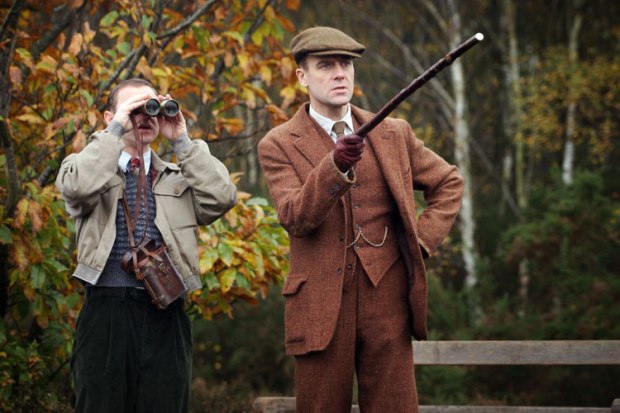 In Room 13 Professor Anderson (Wise) is staying at a local hotel whilst researching a rural cathedral’s library. Moving to the hotel’s Room 12 after complaining about the one he’s originally assigned, Anderson is disturbed by noises from Room 13 next door, a room which keeps mysteriously disappearing. When he and a fellow guest eventually find the room, they soon wish they hadn’t.

After breaking away from them in the previous volume, this last DVD returns to stories by, or based on those by, M. R. James. The secret of his macabre tales was that seldom is anything ever shown. The horrors which befall their unfortunate heroes are, as here, for the most part in the imagination – or are they? The joy of his stories is that much is left to the reader, or in this case the viewer, to add flesh to the bones of the spirits which terrorise the scholarly characters that people them. Which also lends them a timelessness, making them as effective today as when they were first written.

Not in the same league as previous dramatisations like the classic Whistle and I’ll Come to You (1968) these stories (with extras including a booklet of essays by Jonathan Rigby and Simon McCallum, as well as Christopher Lee reading Ronald Frame’s adaptation of ‘Number 13’), will none-the-less add a chilly frisson to your television viewing as the long nights draw in.