The films of cult Dutch director Dick Maas are as notorious for their difficulty to see, as for their often graphic depictions of murder and mayhem. Released on DVD his latest, Saint, gives a new and murderous twist to the seasonal legend of St Nicholas. Here the director reveals that some of his personal views are as controversial as his films.

Saint was shown at FILM4 FrightFest in August. How did it go down with the fans?

Mainly good reactions. There are people who hate the movie and people who love it. When you go into the cinema expecting an all-out gore movie, you can be disappointed.
There’s action, some gore, some jokes. There are also fantasy elements.

In Saint you ‘poke’ fun at traditions like St Nicholas. Do you think there’s a place to do that with things like Christmas or religion as a whole, which is important to so many people?

Why not poke fun at religion? The Catholic church can use a big spanking. They’ve used St. Nicholas, the bishop of Myra, for ages as a promotional tool for their own cause. I think the pope is one of the greatest villains of our time. Needs his own movie too. THE POPE is coming! Hide your children!

There’s a sense the mayor and officials are trying to cover up the children’s deaths and are paying for Frank’s silence at the end of the film. Were you trying to make a political statement or did it just fit the storyline?

Government officials are constantly covering things up. That’s common knowledge. So it’s an obvious statement to make. Of course it suited the storyline, but what else could they tell? Saying that a big part of the Amsterdam population has been slaughtered by a Catholic Bishop does not win you much votes in the polls.

A lot of ‘violence’ is aimed at children in Saint, eg with Timmie and later the children in the hospital, which can be quite disturbing. Was this intentional?

St. Nicolas is always depicted as a good-hearted man, who loves children. With all the scandals that saw the light of day in the past years, grownup men, dressed in red robes, putting children on their laps should be met with the greatest suspicion.
So, I show the real face of St. Nicholas, a disturbed killer. And age doesn’t count.

Much of Saint‘s cast is young, in their twenties or early thirties. What was it like working with such a young cast, and what did they bring the film?

I wouldn’t call people in their early thirties young. In the movie the main characters are under twenty years old. I’ve tried to cast actors in that age group, but it was difficult to find enough good actors. Most of them weren’t experienced enough or couldn’t handle the role. We decided to go for an older age group of actors. And I think they were quite convincing as teenagers.

Huub Stapel, who plays St Nicholas, and Bert Luppes who plays Goert, have been in several of your films. You obviously work well together?

I worked with Huub in 5 films. He’s a friend and when I have a part for him and he likes it, we work together. Bert had a very small part in Amsterdamned. He’s now a famous stage actor in the Netherlands. I immediately thought of him for the part of the detective.

When Sophie is attacked whilst babysitting her brother Timmie, there are echoes of Halloween (1978). There’s also touches of The Fog (1980) with the harbour police being attacked on their fogbound boat. What influence has the slasher genre had on you?

Halloween was a movie that influenced me very much in the seventies. But I didn’t deliberately start out to pay homage to those Carpenter movies. Of course I was aware of the similarities, but it was also hard to avoid them. And a steadicam shot of three girls walking home after school through the snow will always be compared to Halloween, but I don’t mind.

In the film Frank and Goert build an uneasy alliance. What did you see as their relationship?

Goert has the knowledge and Frank the stamina. Goert needs Frank to fulfil his goal. There’s nothing gay about it.

As with your previous film Amsterdamned (1988), the city plays a major part in Saint. What is it about Amsterdam that you love and how does it lend itself particularly to film making?

Amsterdam is one of the most beautiful cities in the world. It’s very cinematic. It is a character in the movie. In Amsterdamned I explored the canals, and the lower underground of the city. In Do Not Disturb I did the same on street level.
In Saint I went up on the rooftops and looked down on the city.

One of the film’s set pieces is when the police chase St Nicholas across the rooftops of Amsterdam. How did you go about filming that?

The rooftop chase was one of the most challenging action sequences I ever did.
There weren’t many examples in other movies of a galloping horse used as an element in CGI. So we had to invent our own method. For the most part we used a real horse shot against green screen. We made a three meter high, 50 meter long scaffolding in front of a green screen on which we let the horse run. Also we used a treadmill. Combined with the plates we shot on the Amsterdam rooftops on the coldest winter nights since ages, it made for a convincing sequence.  We used a 3D horse only in 2 shots.

You have a thing for car chases (both in Amsterdamned and Saint). What’s with that?

Almost all my movies have chases of some kind. Maybe it’s because I like people chasing each other. By car, motorcycle, horse, speedboat, I’m not particular.

Saint is quite graphic in it’s depiction of murder. In a similar way the deaths in your film De Lift (1983), and the notorious scene in Amsterdamned where the dead body hanging from the bridge is dragged along the tour boat, leave little to the imagination. Do you set out to shock and how do you come up with such memorable images?

It is not easy to find new ways of killing off your characters. St. Nicholas using his staff to decapitate people is certainly not done before. The elevator repairman who gets his head chopped off by the elevator, I hadn’t seen before either. But these kind of ‘fun’ killings are not nearly as gory as those in Saw or Hostel.

A lot of your films fall within the horror genre. Do you see yourself primarily as a horror film maker, and what is you main aim when setting out to make such a film? What scares you?

I don’t consider myself a horror film maker. I make movies in different genres. I do comedy, thriller, and action/horror. I like to make popcorn movies for big audiences. 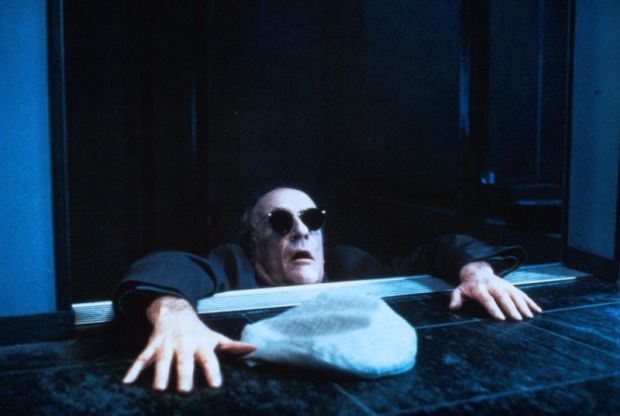 Does Saint have a message, and what do you hope viewers will get from it?

If you want messages, look in your mailbox. I just want to entertain people.

I really would like to see this differently. Luckily Saint will be distributed all over the world. The problem with most of my other movies is, that I don’t own the rights anymore. So I don’t have a say in the distribution. I can only hope that someday that will change and that my movies will be distributed, uncut and in good quality, all over the world. I put my movie Flodder (1986) on my website (http://www.dickmaas.com). It’s a dubbed/subtitled version, free for everyone to see.

You often write, direct, produce and even compose the music for many of your films. Why do you like to be involved with so many aspects of the film’s process?

I want to be in control on all the aspects of my movies. So if the movie is bad, it’s my fault, and if it’s good, I can also take the credit.

Which directors, writers and films do you feel have most influenced you?

I have been influenced by a lot of directors and movies. Too much to mention. To name a few directors: Spielberg, Hitchcock, Tony and Ridley Scott, Ettore Scola, Ron Howard, Clint Eastwood, Luc Besson …  A few movies: Clockwork Orange, Jaws, Halloween, Alien, Nightmare on Elm Street, Terminator, Erin Brockovich …

What would your advice be to anyone wanting to get into film making, and what have you learnt from your own experience?

Don’t be in a hurry. Work on several projects at one time. Always stick to the first concept of your movie. A project that was great the moment you conceived it, will still be great even when it is starting to bore you to death.

My next movie is Quiz (2012). Also a movie in the works for several years. Quiz is the story of a famous gameshow host who has an appointment with his wife and daughter in an Italian restaurant. They fail to show up on time. Then a weird guy comes up to his table and claims to have kidnapped his wife and daughter.  The gameshow host now has to answer ten questions within one hour if he wants to see his wife and child back alive. We finished shooting last week and are in the middle of editing.  The film will be completed early next year.

Thank you for your time, and we look forward to seeing what horrors you will unleash next!

I hope I don’t disappoint you.

This interview was originally conducted in 2012